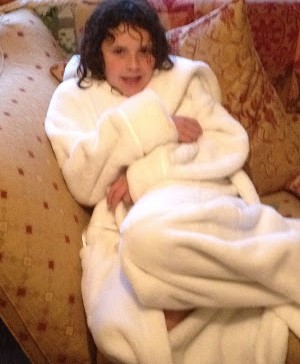 If God Had A Baby…

Well, Zac is back and seems a bit tired, but thats about it. He went up to cricket practice, came back and jumped in a hot bath. Of course, mum is in Benidorm, so while the cat’s away, this particular mouse will steal her gown! 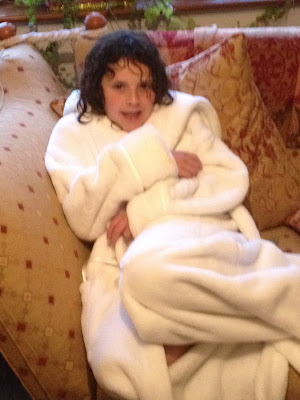 Reports back suggest that he was a bit embarrassed by the appearance of his mum on Thursday night even though his friends were pleased to see her. His favourite activity was abseiling. He abseiled from a bridge that was every bit as high as the big red one in Stockport. Hmm, just checking that his pants aren’t on fire.

So, its back to normal today. I emptied his bag, including his wash bag, and held out an item.

“Have you not used this at all?” I asked, as he studied the item in my hand.

“It was next to your toothbrush and toothpaste!”

He lost one of his retainers in bed, and despite moving everything around we could not find it. What I did find, under his bed, was a whole heap of odd socks. They can’t all be his, so if your child has visited at some point, and is a sock missing, I know where it will be! It will probably need washing as there were a number of sticky sweets under there too, as well as several crepe wrappers.

One of the hopes from Whitehall was that he would start to eat new and varied food. No such luck, and he was delighted to tuck into sausage and chips when he got home. Now, I made chocolate cup cakes yesterday, the ones with chickpeas in, and they didn’t quite turn out as expected. The recipe is really simple, but I can’t find the original. Think I might have used one too many eggs, and too much bicarb. Either that or I need to make 18 rather than 12. Anyway, here is the finished plate. 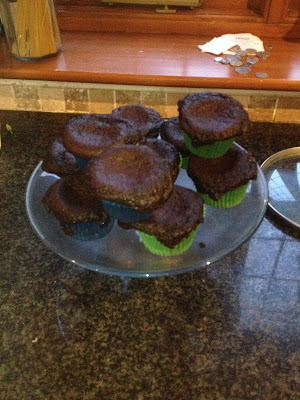 Cakes far exceeding the capacity of the cupcake cases! Zac was even more pleased at these than the sausages. “Mountainous. Delicious. Its like God had a baby.”

He has not yet got to grips with the Alton Towers crash, other than ‘looks like I won’t ever be going on The Smiler’, and he figured out that countries have been bribing people to host the World Cup but he worryingly asked, ‘why is that illegal?’ He is also concerned that the women’s World Cup is being held in Canada. ‘Isn’t Canada freezing cold?’

Back to the belles of Benidorm, and there was a conversation on Thursday night where Sally asked Helen to confirm that ‘I just need my phone, passport and money.’ Within an hour of leaving home I got a text from Helen informing me that Sally has forgotten her phone. Perhaps its an age thing, as last night she phoned home using a Skype call. I answered the regular house phone to be greeted by ‘Can you see me? I can’t see you.’ It was then pointed out to her that our phone does not have a camera or screen, and a call via Skype is just like a regular telephone call.

Yesterday I received a couple of CDs from Paul Lamb. very kind of him, and I looked forward to listening to his harmonica belt out some mountain hillbilly blues in the car. Then I discovered that the Courtesy Clio does not actually have a CD player. Ridiculous. The Sportage had better have one – or the deal’s off. And speaking of deals, Renault Manchester have told me that I can expect a full refund any day now. I have given them my sort code and account number. They then called back and I gave them the name of my bank. I am still expecting…

Incidentally, the white car may well be with me as early as Friday. I am intending to go down and sign the papers on Monday, when I may well take a slight diversion to Shaw Heath to share a glass of wine with my good friend Clive Ashton, and find about about the intrigue that his life has become.