It seems like it has been a quiet week, but not really! I suppose 4 days on The Trip in Madrid could never be called ‘quiet’, particularly with the penchant that the Madridistas have for going out in the middle of the night and partying until the middle of the morning.
Of course, the aims of this blog are to frequently tantalize, occasionally titillate, and always entertain, but what goes on The Trip stays on The Trip, as a well known Trip member who once did something very embarrassing on The Trip often said. However, I can give you a few snippets about the glorious capital of Spain.
Firstly, the Drum & Monkey do a fine breakfast. I know that’s not really Spain but they had a Greek night on Saturday so its near enough. We landed rather late, by English standards, and after a quick change got dropped off in an area that the taxi driver thought  would be good for tourists. Bad move. The street hustlers plagued us as soon as we came out of a bar or showed any sign of indecision, which, if you have ever been on a Trip, you will realise is very frequent. Come to this bar, go to that bar, have a free shot of some chocolate and petrol concoction that will remove your tastebuds. Oh yes, and don’t buy the onion and cheese pie. Especially if you are hungry.(Madrid culinary tip 1).
The following day we discovered that our hotel had one major design flaw. The swimming pool received exactly zero hours of sunshine as it was neatly tucked away in the middle of some very tall structures. Unsurprisingly it was very cold, and welcomed nothing more significant than an outstretched finger into its icy depths.
The hotel breakfast was substantial, though beware yellow drinks with brown topping – this turned out to be thick custard and stale Coco Krispies. (Madrid culinary tip 2).
Traffic in Madrid is busy and chaotic, but we got dropped outside a couple of ‘local’ bars and sampled excellent food and beer. Madrid, to me, will now always be synonymous with good burgers. However, beware the Japanese chicken which is about as well cooked as Sushi (Madrid culinary tip 3), and if your burger is particularly thick be prepared to discard the completely raw meat in the middle (Madrid culinary tip 4). Having said that, nobody died! Another bargain was the Spanish omelette. The size of a spaceship and enough egg and potato to feed a family of four for about 10 Euros. (Madrid culinary tip 5). Far removed from the infamous omelette bitch of Malaga.
We stumbled across the Plaza Mayor, controversially NOT where the Mayor lives. This large square is surrounded by cafes (not the best places to eat – Madrid culinary tip 6), and there are a lot of buskers and street artists. Of particular interest was a fat Spiderman who thought Elliot could be his son. Hilarious, though somewhat personal. There was also a box containing 3 heads, only one of which was real. Quite effective after a few beers. Just beyond the Plaza Mayor was one of our best finds, the Mercado San Miguel. This is the equivalent of the Arndale Centre’s food court, but so much more besides. The market contained dozens of stalls selling tapas of every description, different types of paella, sangria, beer, cider, wine, mozzarella, desserts, sweets, fruit and vegetables, and all very reasonably priced. A great venue for lunch or a quick snack (Madrid culinary tip 7). The black paella, coloured with squid ink, is very tasty, but it can have a strange effect the following morning when a visit to the loo resembles a week of drinking Guinness (Madrid culinary tip 8). The Gulas is amazing. Looks like little white and black worms, though it is actually the fish pollock sliced thinly to resemble the texture of elvers (who ever thought that was appealing outside the sound of the Bow Bells?). Raw, and very nutritious for the health conscious (Madrid culinary tip 9). 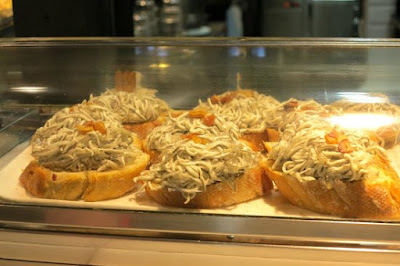 Mmm…Gulas!
Madrid nightlife is never dull, with many bars offering free tapas if you are drinking. However, the tapas is rarely the best! (Madrid culinary tip 10). On one particular street we sat half way between MacDonalds and KFC, sharing the promenade with shoppers from M & S and various Spanish boutiques, whilst gaily dressed prostitutes wearing incredibly short shorts and expensive looking shoes tried to tempt fathers away from their family gatherings.
A must see in Madrid is the Santiago Bernabeu, home of Real Madrid. The stadium tour costs 19 Euros, and it is worth every cent. Particularly when you get to meet Ronaldo! 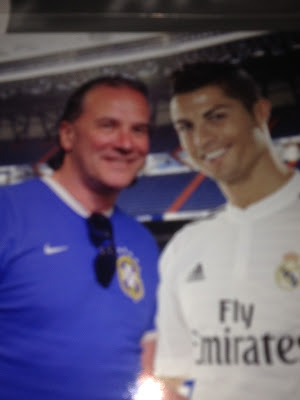 It is glitzy, informative, extensive and cheesy, all rolled into one. And like any good tour, the last stop is the hugely overpriced souvenir shop! Seriously though, it makes the Old Trafford equivalent seem poor by comparison, though Los Blancos are yet to include a plane crash in their illustrious history.
Madrid airport is a splendid place, with lots of choices for food and drink. I would avoid pizza with too much cheese, giving off the rich aroma of sweaty feet (Madrid culinary tip 11), but I would recommend the Foccacia (Madrid culinary tip 12).
Away from Madrid it really has been quiet, although there have, as ever, been a few items of note. Zac’s football team have been virtually unchallenged for two weeks, giving Zac the opportunity to practice his celebratory dance whilst idling in his bright goalkeeper costume. Ole’s team have also started to win, though in their last match this was at the expense of an unfortunate opposition defender who hit a post with one leg excruciatingly either side. We wish him well.
When returning from 4 days away it is natural for a husband and wife to give each other a hug, and this we did in the kitchen. Zac was not embarrassed, but he did remark, “I’ve got a friend round. Just saying.”
And speaking of Zac he has been giving his opinion on several things, as you might expect. Top of his list was the scoring situation for the second team. His view is that £20 is nowhere near enough for a full day’s work, in fact it is illegal as it is below the minimum wage. I pointed out that he would get his tea too but he wasn’t interested in that, and then he turned his ire to the current scorer. “Tom Heyes ruins it for everyone. He would do it for nothing so the money will never go up”.
He also has an opinion on his maths group. He confidently announced that he was about to get moved up into a higher set after a recent homework exercise. “What did the teacher say to you?” his mum asked. “Nothing – I just checked out everyone else’s homework and mine was the best.”
Monday saw a big waste of time! I am checked in for an arthroscopy on Friday, and I had a pre op assessment scheduled for Monday evening. I left work in Nottingham early and drove through various small towns for over two hours to get to the Alexandra in Cheadle. I was shown into the treatment room where a nurse shoved a swab up both nostrils, mine not hers. She then asked me to drop my trousers and pull my pants together to expose my groin. Same procedure, a swab on each side. At this point I considered whether I was the right patient, or was she really expecting someone who was having a combined nose job and vasectomy, but no. As she efficiently told me that I was done, less than two minutes after entering the room, I asked what was the purpose of the swabs. MRSA screening. You could have got your GP to do it.

And so to Friday. The arthroscopy is to be done under general anaesthetic. And I need to have a responsible adult with me for 24 hours afterwards. I asked Sally if she knew anyone that fits the bill. Judging by her reaction I don’t think that she does.