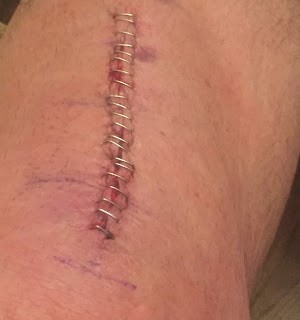 Another Year (Almost) Over…

Well its almost New Year, and the chocolate fest will soon be over. Even at Easter its not really acceptable to tuck in to half a box of Ferrero Rocher at 10 am, have brownies with cream for lunch, and eat stuff thats in the fridge just because its there. Someone needs to tell Sally that, even at this time of year, shopping is optional! The Bags For Life have been discarded in favour of huge boxes. Today was a horse riding expedition, followed by a trip to the shops in Macclesfield. That probably won’t last long as she has taken Zac with her, never the most patient of shoppers.

Roll on Saturday, and not just because we will be well in to 2016, it is also the day I can officially put full weight through my leg. I must admit, I have been tempted a couple of times, and it doesn’t quite feel right, with some interesting swellings in places that I didn’t think could swell.

Its been a busy week in the kitchen, and not always a successful one. I made a cranberry, almond and orange sponge. One of Nigella’s. It looked very easy on the telly, but when I found it on the net the quantities seemed a bit off. I checked the video on Youtube and after getting distracted several times, sure enough the quantities are significantly different. For one, the eRecipe uses a mixture of ounces and cups. Never did quite get the American use of the ‘cup’ as a measurement. Anyway, it came out very sticky, gooey and crunchy, all at the same time, more like a crumble than a sponge, but Sally loved it, and it didn’t last long. When I get the quantities right she may well be disappointed.

I’ve not been to the pub for ages, maybe manage a cheeky couple on New Year’s Eve, but if not then I will definitely be heading out on Saturday!

There always seem to be tragedies around this time of year, and I guess the flooding is what has made headline news this week. There has also been an earthquake, a shark attack in Gran Canaria, and a terrorist bomb plot foiled. There have been some very sad deaths, too. Lemmy was arguably the biggest name, but he had a great life in rock and roll before succumbing to the big C at the age of 70. Specials drummer John Bradbury also passed away at the alarmingly young age of 62, but the most tragic was surely Pavel Srnicek who suffered a cardiac arrest aged just 47. Frank Sinatra has been on the tv, but he died years ago, whilst Elvis died almost 40 years ago, but that certainly hasn’t stopped him from releasing a new record.

One of my favourite Christmas presents, for various reasons, is my Muddy Fox cycling shades, with 4 different coloured lenses. I look forward to getting out in the very near future, though shades may be pushing it a bit, except perhaps to stave off the glare from another present, a fluorescent lime cycling top. You will definitely see me coming.

A gift that I gave to the family was tickets to see the stage version of Goodnight Mister Tom, its about the only chance I have to get the kids to do something educational! Yesterday they took to the garden in new Real Madrid and Barcelona kits. El Classico lasted all of about 10 minutes, followed by a debate about whose football team was better at whatever ages. and that is about the only exercise that they have had since the Christmas holidays began. To be fair, Ole has walked from his bedroom to the fridge many times, whilst Zac has carried lots of heavy weights in the form of disguised chocolate from the kitchen to wherever he thinks he can eat it undetected.

Tomorrow is New Year’s Eve, and I have a beef chilli partially made in the fridge. I like chilli to be hot, I hope our guests are similar! There are always a few odd people around, and so I will be making a vegetarian sweet potato chilli too. Probably not as hot. I think festive apple puffs will come in handy, so I had better make some almond paste today. So much for the term ‘holidays’. Speaking of which, Sally is hoping to head off stateside in February to ride a horse along a trail. Not sure if she thinks she is Ruben Carter (you have to know the song) or Annie Oakley. She then hopes to take in a rodeo. Its a bit ambitious, particularly as she is going with my sister Fiona. Sally rides quite frequently, and although my sister is probably used to sitting on her arse for long periods of time, I am not sure her business class airline seats ever quite mimic five hours in the saddle of a potentially bucking bronco!

I think a week in the more sedate surroundings of a Cuban beach seems a better option to me.

Today Storm Frank is battering the UK, and Whaley Bridge is getting the tail end of it. Nothing too drastic, but I guess the X-Boxes will be getting some more hammer, whilst next week the first real snows of winter are forecast. That’s great with the prospect of returning to work. Now where’s that box of Famous Names Liqueurs I was looking forward to?