We Do Like To Stroll Upon The Prom Prom Prom…

Twelve months ago it was a fanciful suggestion from a 14 year old willing to give up his birthday party for it. Now, the reality of staging the Chapel High School after prom party at our house is becoming a nightmarish reality.

First, the ground rules. NO ONE is allowed in the house. It must all take place in the garden. I am assured that large quantities of sick buckets need to be placed around the garden. We will need at least 2 portaloos. Hmm, maybe get condom machines fitted? Hey, don’t judge, have you ever seen a drunken 16 year old try to get a condom over his (or her) head?

We have gazebos, I certainly hope these will not be required for any future event – they are unlikely to be serviceable. We also have a tarpaulin – not sure what this is for, except maybe to scoop them all up at 3am and dump them somewhere else in Whaley Bridge. Anywhere will do, just as long as it is not at my house.

We are trying to source hazard tape. This was originally intended to prevent the youths from falling down the banking and potentially onto the road. I think there may be many more uses for it before the night is done!

More updates on this one soon.

I should be excited this morning. I am going to pick up my new silver car. Unfortunately it involves a drive into and out of Manchester, never a joyful experience.

I must say thanks to Lou Cooper for giving me the number of Jo Hopkins from New Mills. Jo is a seamstress. Now, there used to be one near the bus stop close to Park Cafe in Whaley Bridge. I asked on Facebook if she was still doing it, and the replies ranged from ‘yes’ to ‘she moved to St Helens’. So, I went down myself to have a look, and her seamstress’s shop looks pretty empty. Anyway, Jo took my trousers and waistcoat and promised to have them done in time for the races next week.

Zac had an asthma attack last weekend. That is a scary thing, and its the first time it has happened for quite some time. He was at Archie’s  birthday party, and we still don’t know what brought it on. Maybe he is allergic to magicians. Anyway, just a reminder that this can happen at any time – always be prepared.

And speaking of traumas, let’s go into the kitchen. On Monday, the sink overflow was blocked. I unblocked it using boiling water, washing up liquid, bicarbonate of soda, and more boiling water. Worked a treat. Yesterday, Sally did this… 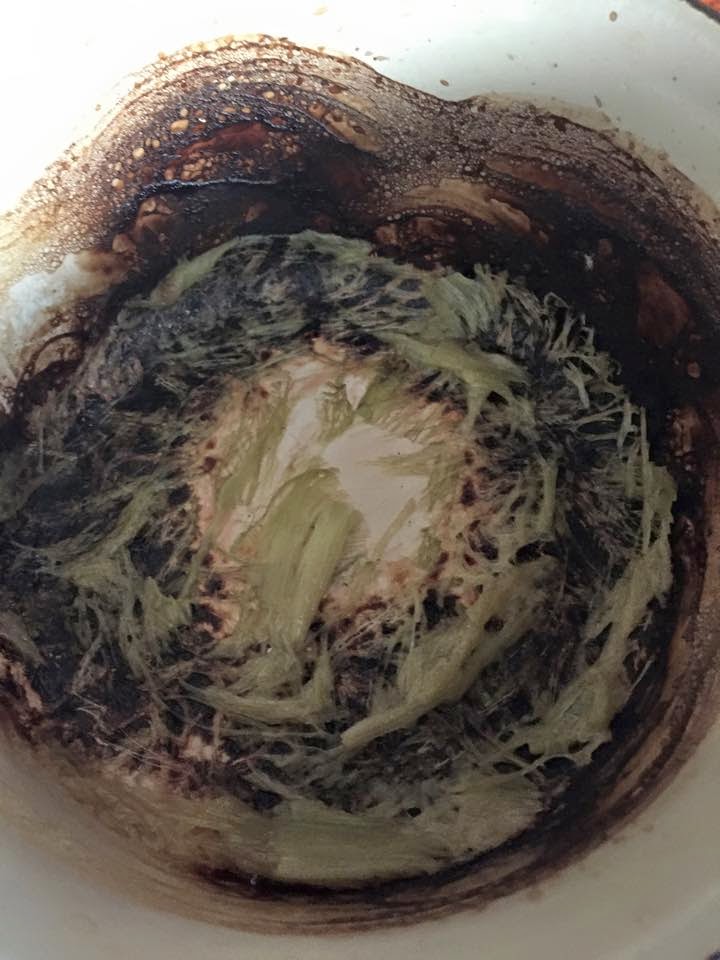 So here’s a question for you…

Is it…
1. The latest pic from the Hubble telescope
2. A prop from Little Shop Of Horrors
3. Rhubarb

If you guessed 3, give yourself a prize.

I was only out of the house for 45 minutes, but that is what I came home to. Apparently she had been chatting. Remorse? No – in fact she thinks it quite nicely depicts the lost souls of the rhubarb, and she wants to enter it for the Turner prize.

All that I know is that the final Le Creuset pan has reached the end of its lifetime guarantee.

Is there a connection between Sally’s cooking and the blocked sink? I will leave you to draw your own conclusion.