Well the week started with a Facebook message from my ex boss looking for a test manager. Another stint in Nottingham? With that traffic? Well its in a slightly easier part so I agreed to meet the programme director on Tuesday. An hour at Costa and the deal was sealed – and I will be doing 3, 4 or 5 days a week in an office that borders a retail park containing Sainsbury’s, MacDonalds and Pizza Hut. Need to get a lot more cycling done. A few days later another old contact asked me if I could help him out with some mainframe training. It never rains….

Wednesday was a strange kind of a day. Zac and his classmates headed up Kinder, whilst I went on a different kind of challenge to an orthotics specialist in Stalybridge.

Zac got about three quarters of the way up Kinder, but the weather beat them before they got to the interesting bit about planes. Anyway, this is the new Zac, and he wants to go back to complete the mission.

Back in Stalybridge the good news is that my previous insoles are almost identical to what I would be prescribed with if I got new ones – just need to remember to wear them. The bad news is that, although I have a lot of trauma around my left knee, my real problem is in my right ankle that is a bit of a car crash. ‘Have you had any traumatic experiences on your right ankle?’ he asked. ‘Have you got all day?’

He got the picture and he wants me back in a month to see if the insoles have made a difference (along with some leg strengthening exercises – but that probably wont happen!)

Two days later I was at the Alexandra hospital in Cheadle having an MRI scan. Why do those machines make so much noise? Anyway, results are out this week and next week is the follow up with my consultant in Manchester.

Also on Friday I managed to get to Marple on my bike again, and this time I headed off to the right. Not very far, just enough to reach Marple village where there is a very conveniently placed Costa. It was a pleasant cycle, with lots of people on the towpath, and many canalboats slowly meandering from Marple to Buxworth or along some other circuitous route. Now, this may just be me, but as I pass canalboats I see boaters looking listlessly around the canalscape (yes, I made that word up – but you know what it means so that makes it legitimate). Quite often they try to catch your eye, say ‘good morning’, or give a little wave, then it is back to staring into the distance. Are they still dreaming the dreams that they had when they first embarked on a life aboard a narrowboat? Or are they, as it seems to me, thinking ‘why oh why did I invest all of my savings into this tiny craft that travels slower than most walkers?’ Or ‘I’m absolutely bored shitless’. Its a different pace of life on board one of those vessels, and not one that I would want to get involved with. Still, each to their own! Friday was also a bit of a cookfest, with Beef Chilli, Chicken Fajitas and Chocolate Chickpea Cupcakes all on the kitchen agenda. At that point Ole decided that he only wanted high protein low fat food, such as fish, but I knew it wouldn’t last, and later that night he had both chilli and fajitas, spurning the cupcakes for salt & vinegar crisps!

Friday was also the deadline for the Whaley Warriors programmes. Our Under 19s were due to face Hadfield Heat two days later, and I managed to get the programmes printed and copied at Peartree Print. A tad expensive, but they did a really good job.

Saturday was more relaxing, until we played cricket, triumphing over Buxworth by just two runs in a real thriller. Crompton’s arrived sparked merriment all round, and also disappointment for the lad himself as Shawy failed to give me out lbw!

Another PCN arrived in Sally’s name, and at first I thought it was another tiresome reminder about the Aldi Macclesfield incident, but no. This was a brand new one from the Marriott at Manchester Airport where she had spent three hours in the restaurant. Oblivious to the requirement to pay (now wouldn’t that be good if you were going on holiday?) she simply parked, ate and left. The PCN looks very similar to the previous one and, now full of bravado, she is steadfastly refusing to pay. I wonder how many PCNs it would take for Parking Eye to justify actually taking her to court. According to a local solicitor, who shall remain nameless, it would never happen. Watch this space…

Sunday started with rain, and the Under 11s match was postponed giving me a bit more breathing space. It was then on to the Whaley Warriors match, and paella for 50. Actually, it only seemed to stretch to around 35 portions – might have to cut them down in future! That seemed to go well, even managed to get the pan oiled and put away as the cast of The Raven were getting their makeup and costumes done. Time for a less than perfect run through – and it was showtime. The show went well. They all seemed to come alive when the metaphorical curtain rose, and the post performance review was a typical youth theatre review, plenty of praise, but plenty to work on. They have three more performances to improve on the debut, and then its on to the next project. Zac gave his own review after the show ended. 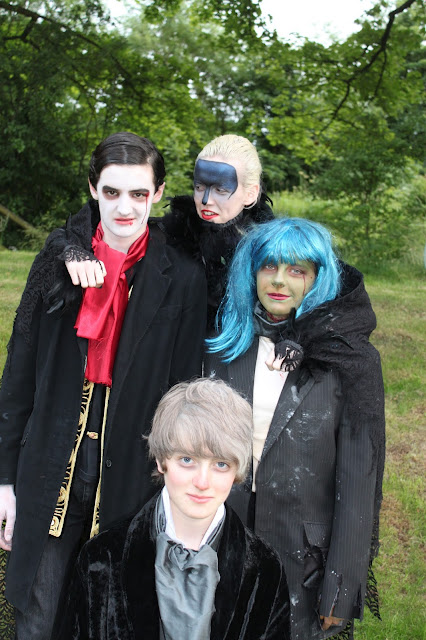 “It was a bit short. Was it just a poem?”
“Yes – it was a poem”
“Why didn’t someone just read the poem instead of having all that drama?”

I can see Zac being quite successful as a reviewer.

Jaws
“Why not just stay out of the water?”

Twister
“Why don’t they move to a country that doesn’t have tornadoes?”

Jurassic Park
“They should have left that dino DNA alone”

Saving Private Ryan
“They should have let him die”

Anyway, we were all packed away, I dropped off in Hayfield, then I headed home, tired and with a long drive to Nottingham the next morning. But…Chapel Road was shut due to a fuel spillage, so it was a quick about turn and up into the wilds of Eccles Pike!

To be fair, the traffic around Nottingham is not half as bad as it used to be (probably shouldn’t have said that).

Today was a working from home day. Telephone interviews this morning, and transatlantic calls this afternoon. Add to that the unloading of the car from The Raven, washing cricket kit, making a curry, running an Under 11s game, and doing a bit of writing…I’ll be glad to get in bed. Goodnight! x