To Hell And Back (via Toronto)

Q. When is a Maltester Cake not a Malteser Cake?
A. When Sally picks off all of the Maltesers for herself turning it into a plain old chocolate cake. 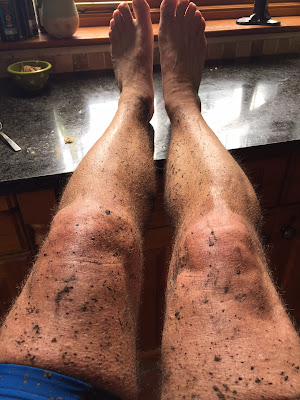 Muddy Fox
As you can probably gather from the cycling reports I’ve become quite health conscious, and this led to some concerns when I discovered a distinctly red tinge in my pee. Fortunately, before panic set in, I remembered the rather large quantity of beetroot I had eaten the night before. Not the first occasion, but I do seem to fall for it every time.
Guess what? The Jam and Jerusalem brigade had better watch out. All of these jams and chutneys that they make, with ingredients picked from our very own hedgerows, are illegal if they sell them for profit. I kid you not. So if a WI lady ever offers you a jar of blackberry jam, you should have her arrested immediately. Its been suggested that they stick to calendars for their fund raising efforts, but looking at some of the shapes and sizes involved that should probably be a criminal offence too.
Sunday saw the Euro 2016 final, and even Sally was gripped by the bug. She decided to have her first football bet, and I guess it lost as she never mentioned it once the game kicked off. Of course she is not a football fan, often just delighting in the negative effect it can have on others (somewhat similar to Darren Crompton). However, when Ronaldo went down injured there was a genuine outpouring of sympathy. Who did that to him? There was real concern, and I reckon Dimitri Payet will not be invited to our house for dinner any time soon. I think she has a bit of a soft spot for Ronaldo, and when he was substituted in tears it was almost like he was one of her own brood. Or maybe she had backed him to be the first goalscorer. Anyway, all’s well that ends well, and she was as excited as anyone when he finally lifted the trophy. Maybe now I’ll get some help completing my Panini sticker collection for the 2018 World Cup!