You have probably noticed that Pokemon Go is all the rage! And its not all bad news. Zac covered 6km chasing round Whaley for the damn things – which is better than three hours in front of an XBox. It also encouraged good behaviour in Ole and Zac, as they both needed upgraded phones to be able to participate, Needless to say that didn’t last long.

Anyway, I decided that I would combine culture, history, Sunday lunch and Pokemon in one fun afternoon. It started badly as Sally decided not to join us for reasons I won’t go in to, something to do with cutting noses off. So, we headed for Eyam, the plague village. Without Pokemon there would have been ‘do we have to?’, ‘how far is it?’ and ‘what time will we be back?’ but with the prospect of a different village in which to hunt Pokemon they were actually enthusiastic. We reached Eyam and parked up, wandering through the historic streets identifying graves, homes with a story, and a Pokemon gym. We decided to head out of the village towards the Riley graves, where the unfortunate Mrs Hancock buried her husband and six children in the space of a few weeks in 1666. As we approached, there were a few ramblers satisfying their curiosity and paying their respects. Ole pointed at the small ringed graveyard and asked, ‘Is that it?’ ‘Yes,’ I told him. ‘Now put your phones away as its a graveyard.’ ‘Well that graveyard is a Pokestop,’ he announced, and proceeded to raid the Pokemon store of all kinds of useful implements. If anyone could have asked Mrs Hancock I’m sure it is what she would have wanted. 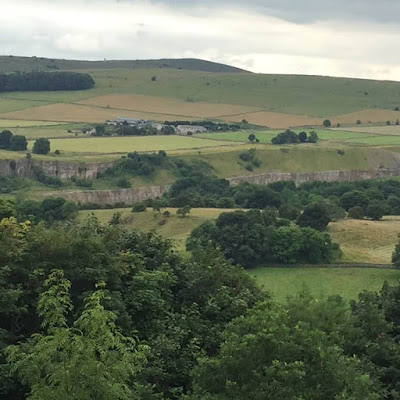 The view from the Riley graves, Eyam
We progressed from there to Foolow, home of the Bull’s Head which is highly recommended for Sunday lunch (see below). Anyway, we sat outside and had sandwiches and chips (the Sunday lunch would have been a step too far for Lady M in her absence), whilst the boys again went seeking Pokemon. It was a fruitful day, they took over a gym and caught a number of the little beasts, whilst covering several more kilometres of beautiful Derbyshire countryside, though I’m not altogether sure they noticed that.
Five and a half years after publication I’ve just received another review for Stags! Not great…
A disservice to all the gentlemen out there
Absolute vile book. Would be enough to put one off men forever if you were a young girl and had never
met normal, civilized men Who fortunately I did meet.

However, there’s no such thing as bad publicity! I would just like to point out that the strapline on the cover of the book, and on the Amazon page, is Drinking, Football, Women. A hilarious window into the world of blokes being blokes.

So not really sure what this lady was expecting. Anyway, it gives me an excuse to gratuitously publish a link to the book itself!
Stags! on Amazon Kindle

Had a lovely visit from Pixie last weekend, as well as my quasi vegetarian sister. So, I made stuffed peppers, savoury rice with tuna, vanilla slices and meringue. Whilst the girls were out drinking (not Pixie, mainly Fiona), I made eggless chocolate brownies that tasted quite nice but were a bit crumbly. Fiona’s reaction? Where are the digestives? I want digestives. Why haven’t you made digestives?

Ole has been at YNot for four days. Not heard a word from him, but that’s probably because he deliberately left his phone at home. I knew it was YNot, because when I went to Tesco the night before there was not a drop of fruity cider left on the shelves. Of course, four days of partying takes its toll, and he has been shattered since his return. I knew he would be, so I made him chilli chicken and chocolate digestives as a welcome home. Yes Fi – you left 24 hours too soon! An odd thing about YNot. There don’t seem to have been any boys there. Ole’s pictures seem to be just full of girls. Even heard that one of the mums made him a sausage, bacon and egg sandwich!

At last I can take a break from the insane chasing around after imaginary Pokemon creatures. Its the start of the new season, and that means I can make up a Fantasy Football team and pit my wits against other like minded wannabee managers.

Well, after marching all over the moral high ground I have now played two of my last three games in the firsts. You can read all about it here!

In an attempt to make up for lost time Sally decided she wanted to eat out last Sunday, and with Ole at YNot we dropped Zac off for a Pokemon hunt and headed for the Swan at Kettleshulme. Unfortunately it stopped serving food at 4pm, and it was now after 6. I guess they have their reasons, but after being recommended the Soldier Dick we headed for the Shady Oak. Plenty of culinary activity there, but they had run out of roast beef amongst other things, so that just would not do. We could have gone to the Bull’s Head at Foolow but that was a little too far, so we opted for the Old Hall at Chinley. We managed to get a car parking space on the road and a tiny table inside, and happy days they had roast beef. They didn’t have my choice, roast pork, but rather than face the wrath of the grinning Sally I opted for roast beef too. It was ok. The beef was nice enough but the vegetables were a bit ‘school dinners’. Next week Sunday lunch will be taken in Gozo, but on our return…any suggestions or recommendations?

Stuffed chicken has become a favourite dish. Basically, slice a chicken breast and fill it with chopped avocado, red onion, tomato and red chilli. Season well. Fiona was quite impressed. Wrap it in bacon. Fiona was less impressed. Wrap in foil and bake for around 25 minutes. Another one for Mmm…No2…Cookbook.

Thinking of serialising The History Of Zombies in these pages. Any of you got high school kids (11-15) that might be interested? It would at least encourage me to get it finished!

I’m staying at Jury’s Inn in Nottingham tonight, just around the corner from Hooters. And guess what? Hooter’s is a Pokestop. Where next? 235 casino in Manchester? Hamburg’s Pleasure Palace? Its no wonder Pokemon Go is so popular! BTW – rumours of a Harry Potter Go game are false!