Well, I have to start this edition with a bit of a gamble. Obviously the World Cup is in full flow, and the bets are on. But I had a couple of quid left in my betting account so I looked for some value.

All teams in the World Cup to score at least 2 goals. Seems unlikely, but at 100/1 why not? After the first match in which Saudi got hammered 5-0 it seemed unlikely, and when it came to the final set of games the odds would probably be a lot more than 100/1!

First up in group A Saudi against Egypt. The Saudis still needed two and Egypt needed 1. Result, Saudi Arabia 2 Egypt 1. Saudi’s winner came in the 95th minute. Wow. Maybe its fate! But lets not get carried away. Group B was possibly a bigger problem. Iran needed one against Portugal and Morocco needed 2 against Spain. Results, 1-1 and 2-2 respectively, with Iran’s equaliser coming in the 93rd minute. Still in the game! Group C was down to the Peruvians needing two against Australia. Result 2-0. On to Group D. Argentina and Iceland both needed a goal apiece, Argentina settled theirs early, but Iceland had to rely on a 76th minute penalty as they went down 2-1 to Croatia. Half way there – but still a lot to do. Group E was a problem. Costa Rica needed two goals against an ultra defensive Switzerland. 2-1 down in injury time they won a penalty, and Brian Ruiz smashed it against the woodwork. Fortunately it rebounded, hit the keeper on the head and went in. The drama increased day by day! Group F featured the South Koreans needing just one goal against the mighty Germans. They scored two – in the 92nd and 96th minutes. Group H was decided next, with just the Poles needing a goal. This was sorted early so I could relax until Group G was played out later that day. England, Belgium and Tunisia were all done and dusted – but I still needed Panama to score against Tunisia. 33 minutes in I turned the game on to see the ball in the back of the net, and the red shirts of Panama celebrating, but maybe not as much as I was!

Speaking of the World Cup, the tv aerial works (see previous edition). Unfortunately I have not had much time to use it as life and alcohol seem to have got in the way!

My Thursday morning shows on Ex Pat Radio have featured some real literary superstars. The past two weeks have been with Amanda Robson, Judy Leigh and Fiona Gibson, and prior to that I chatted to Sue Moorcroft and Caroline England. Both of these are bestsellers and Sue has been number 1 in the entire Kindle list. The shows are now down to a short sharp half hour – and its anyone’s guess as to who will be on next week!

I met my MMU students in North Tea Power in the Northern Quarter a couple of weeks ago. Nice coffee, and that should lead to my website being revamped over the next coupe of months. On the same day I met a mate who was about to get married (see below). We saw a strange sight at Piccadilly, so he decided to take a pic. If you look closely you can see him in the reflection! 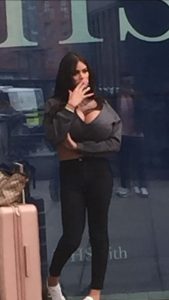 I walked through the centre of Stockport a few weeks ago, and it gave me the impression of a sad old town that was dying. Pubs were closed down, buildings boarded up, and the few signs of life were as if someone had stuck a sticking plaster on the hole in the Titanic! However, a week or so later I went to the Light Cinema close to Princess Street. What a difference. The cinema itself is spectacular, with seats that make it seem like you are watching the movie in bed, and the surrounding area is filled with bars and cafes to give the place a really lively feel.

We’ve had a new cooker delivered. It takes a bit of getting used to but I’m getting the hang of it. Sally, of course, is barred from using anything but the rings on top.

I’m now investing in another student, a chap from Buxton who writes computer games. We are currently jumping on the World Cup bandwagon with a game for Android! You can have a look at it here:-

Ole managed to get a car after much research (mainly from his mum), however, there was a bit of a problem with the insurance. New driver insurance is always an issue, but if you add parents on then it can reduce dramatically. So we did. But, when they checked Sally’s details they reported that she had not declared an incident from a couple of years ago. The incident was in Sainsbury’s Car Park in Ashbourne, when a nutty woman deliberately slammed her car door into Sally’s, claiming that I intimidated her. Sally wasn’t even in the car at the time. Some frantic phone calls later and we got a suitable reduction, with the road rage incident being removed from her record.

Any idea what this is? 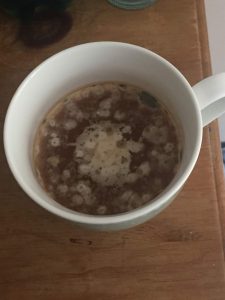 Ole says it is my sister Fiona’s, but he has been using our spare room for a good few weeks and for some reason left this untouched. Answers on a postcard!

A random statement – Zac’s favourite hairstyle (on a girl) is a bun. I’ll just leave that one with you.

We’ve just had a lovely couple of days away in Majorca for a wedding – but as ever it did not go without a hitch. It started at the airport, or rather on the way to the airport. Ole had done his first shift at the Drum & Monkey the night before, so I, of course, sat at the bar whilst he served the customers. Four pints of Peroni, several pints of normal lager and a couple of vodkas later we went home. Five hours further on it was time to head for the airport. Sally drove! I had all the paperwork, and the security man was surprisingly polite when I tried to get through the barrier with the return part of my ticket, unlike the woman behind who tutted loudly. Sally was not too keen on this, but got her revenge moments later when the woman and her child had to hastily drink some liquids that were not allowed through security! There was a Ryanair announcement, and Sally said, ‘I wouldnt like to go there!’ ‘Lots of people go to Tenerife,’ I remarked. ‘Tenerife? I though they said Tel Aviv.’ I was going to point out that lots of people go there too but thought better of it.

We got through Palma airport and picked up our rental car, a tiny Fiat 500. Sally had printed off directions from Palma Airport to our German owned hotel, whilst I was using the SatNav on my phone. It got a bit twisty and turny so we turned around, and then turned around again. As it happened we were within 4km of our destination when we took our first wrong turn, but we arrived without too much stress. It was too early to check in, but we sat overlooking the sea as we looked through the information that the hotel had given us. Two towel cards, a map of the sizeable resort, activities sheet, etc. We eventually collected our key and we were taken by golf cart to the other side of the hotel where our room was suitably impressive. We wandered down to the pool and asked where we exchanged our towel cards for towels. With German efficiency they told us we must go back to reception to get the towels, which on reflection did not seem to be very efficient! I tried to get it straight in my head, we got towel cards from reception, and then we had to give the towel cards back to get towels. Now. I’m no Lean Six Sigma expert, but I can see how this process could be improved.

I had a light late lunch and decided that we would not go round the bay to the wedding venue until tomorrow, so after a few drinks and a couple of hours in the sun we headed back to our rooms. The hotel restaurants all closed at 9.30pm so we discussed the option of wandering to the seafront, where lots of restaurants would no doubt be open later, but tiredness set in so we thought about room service. Sally gave me the telephone list but there was no room service on it, though she insisted that this was a five star hotel – they must do room service. No joy, so we raided the mini bar, and dinner consisted of a bag of cheese biscuits and a bottle of water. The following morning Sally tried to work out how to use the in room coffee machine. She pulled out a large pamphlet, that turned out to be a full room service menu containing burgers, chicken, steak, etc. I somehow refrained from swearing. Fortunately breakfast was only a few minutes away, so I tucked in to the nearest the Germans could ever get to a full English, as well as a large slice of chocolate cake. The stroll to breakfast also provided a bit of wildlife – I’ve never seen a hoopoe before! 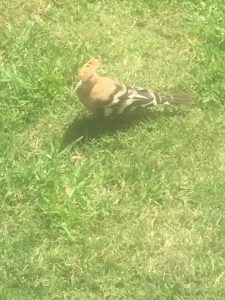 The wedding was a fabulous affair, though when my sister saw a picture of the groom and best man she commented, ‘I didn’t realise it was a gay wedding!’

The following day we had a leisurely lunch on the seafront at Porto Petro before returning to the grindstone back in Whaley Bridge!

Another great trip to York races had one magical moment. As is becoming the custom I ordered Sally a bottle of champagne on arrival. This came in a suitable bucket that was frosted over with the chilling ice cubes. After four glasses the frosted bucket had become clearer and I could read the label on the bottle. “Prosecco” it proudly announced. I mentioned it to Sally who said that she thought it was just crap champagne. Undaunted, she sought out the manageress of the bar that we were in and pointed out their mistake. This led to a full bottle of champagne arriving at the table to replace the remaining two glasses of Prosecco. She then proceeded to question a man in a horse costume, though she thought he was dressed as a giraffe! The drive home was interesting to say the least! 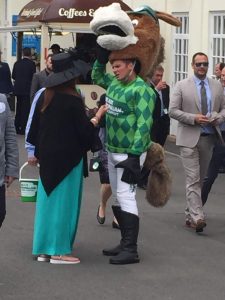