If You Cant Stand The Heat…

We had a very strange occurrence this week! The boys have bought some wrestling mats that they lay down wherever there is space and then grapple with each other. Yesterday they used our bedroom floor, and Bo decided to see what all of the fuss was about. A short time later Ole called down to check on Bo as she was acting rather strange. She was rubbing herself on the mat, yowling constantly, and “presenting” her rear end. Quite simply, she was in heat. Ole kind of realised, and as Zac was stroking her, trying to comfort her, Ole warned his brother, “I wouldn’t do that if I was you mate.” When the problem was confirmed they were both mortified. Bo could smell their sweat and she obviously thought they were two Tom cats fighting for her attention. Zac had a million and one questions, like how does it last for? Is she in pain? etc. Ole simply closed his door and refused to let her in.

A trip to the vet is in order!

The lockdown goes on and on and on!

Our holiday, originally booked for 14th February and subsequently moved to 28th March, may have to be further delayed to May. I’ve forgotten what a beach looks like.

So, of course, you have to find things to keep yourself busy, I am still working more hours than I want to, but all work and no play makes Jack a dull boy, and we all know what happens next!

So I started recording more radio shows for Lockdown Radio. Lots of musicians had Christmas records out, and they were all looking for publicity. First up it was Marty Wilde, the famous 50s and 60s rocker. He was a great guest, and one of the first to receive the Covid vaccine. You can listen to the show here:-

Next up it was a double header, with Chris Meredith followed by the sensational Limahl. I had a lovely chat with Limahl that continued well after the show finished. You can bring back your memories of Kajagoogoo here:-

Finally, it was Richard and Fred Fairbrass, better known as Right Said Fred. These guys could have filled a month of shows with their take on music, Covid, and the world in general. Really good conversation, as well as fantastic music.

Next up I have a show containing the cheesiest records of all time, and an alternative take on Valentine records!

Zac’s driving lessons have progressed, but not without incident. Lockdown meant that his regular lessons were severely restricted, so we decided to insure him on my car, as we had done previously with Ole. We concentrated on minor roads, but he got nervous around Taxal Moor, particularly when he had to turn around! A three point turn was a lot more than three points, and I almost rued my decision not at have parktronic fitted as he narrowly missed a post whilst reversing. He improved daily, and we decided to let him drive to Stockport on Christmas Day.  Sally was in the passenger seat, with Ole and myself in the back. There was a lot of agitated conversation, that came to a crescendo as we approached the lights at the Rising Sun in Hazel Grove.

“Slow down,” said Sally, raising her voice and gripping her seat more tightly.

No reaction, and the lights changed to red.

“Slow down,” said Sally, slamming her foot on an imaginary brake.

As we sailed through the red light Zac shrugged. “Too late now,” he said.

Sally insisted that we switch drivers at the next available layby, but even that was not without incident as she shouted at him to pull over with very little notice. He was getting stressed and her urging was stressing him more.

But he continued to improve! However, we had some stormy weather. This did not affect the driving, but the next time Sally and Zac went out there were shaking fists, blasts on the horn and verbal abuse. Of course, Sally gave as good as she got, and it was only when they returned home that she realised that the storms must have dislodged the L plates. Other road users were simply unaware that Zac was a learner, which is obviously illegal!

He booked a theory test in Stoke, but he failed. Whilst Sally was pleased that she had managed to get him a test at such short notice, she regretted the destination as she had to suffer the slings and arrows of outrageous fortune that Zac attributed his failure to. Still, it was only a 90 minute journey. On the positive side, he got a second test in Salford, and his brave brother Ole accompanied him. This time there were no such problems as he passed with ease. His driving test is scheduled for April, lockdown permitting.

Ole got good feedback from his Coronation Street audition, but sadly no role, and he has not heard anything from a recent Halfords ad audition. This doesn’t seem to have affected his income, as he received yet more fees for the BUPA ad, this time for the use of stills taken at the shoot. Look out for mugshots appearing on a billboard soon!

There is never a good time to get a toothache, and Christmas makes it so much worse. So, when my tooth started aching in November I booked myself in. Root canal surgery was the diagnosis, so I made another appointment and prepared for the worst. Actually, all of the horror stories are mostly exaggerated. There was certainly discomfort sitting in the chair for 90 minutes, but without doubt the biggest pain comes when you get out of the chair, go to reception and pick up the bill. 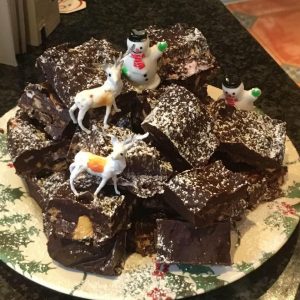 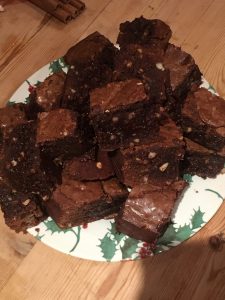 The brownies went particularly well with lashings of brandy cream! 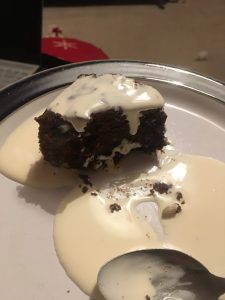 Its not all sweet stuff though, and Ole’s favourite Mexican lentil soup has been on the menu quite a few times.

Obviously Christmas was not the same as normal years, and in particular my stroll to the Drum & Monkey for a few pints of Peroni on Christmas Eve was sadly missed. We decided to have a bonfire instead, and despite several wet days we managed to get a roaring flame. Festive beverages were downed with the traditional cheese & onion pie, plus a Mediterranean twist of Ciabatta with oil and balsamic, and we raised a toast to next Christmas. 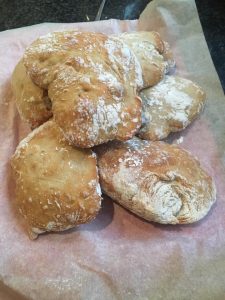 Sally decided that the Creole Cake should have a minimalistic look this year – I’m not convinced, but it still disappeared very quickly! 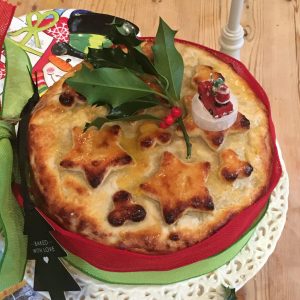 New Year was another strange one, spent playing Game Of Thrones Risk, which was lost on me as I have not watched a single episode. Midnight saw another bonfire with a few impressive fireworks, but again we look forward to normality resuming on December 31st this year.

Bo loved Christmas, and surprisingly the Christmas tree remained intact. The same could not be said for some ornamental twigs and another upright Christmas sculpture. 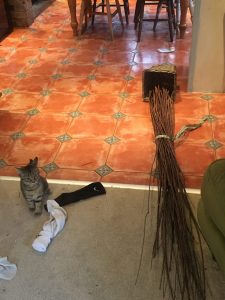 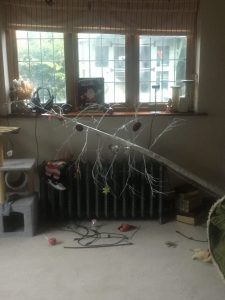 Perhaps more surprising is her love of that most traditional of Christmas vegetables, the sprout! 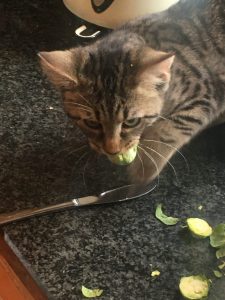 The boys bought us a robot vacuum cleaner for Christmas, and you might think it was to make their lives easier when they do their chores, but you would be wrong. They don’t really do chores. Anyway, Bo is intrigued by it as it chugs its way around various rooms, cleverly changing direction when it hits a blockage. However, if you ever consider getting one of these, ensure you close all doors and block any nooks and crannies. We have lost ours on several occasions; its favourite hiding spaces seem to be under the television cabinet and at the back of the settee.

Brexit may well have impacted Buyanom, as mare owners arranged their 2021 matings far in advance to avoid any complexities arising from transporting horses into the EU.

Worse affected has been PubHead. Our pub based app has more or less been put on hold, but we will be ready with a big launch party when the pubs are open again.

I started another bench project, and this time it turned out to be a lot more complicated. The two cast iron bench ends needed some TLC to restore them, and as they were powder coated I had to sand them down. I spray painted them black, along with the two cast iron braces, and they came up really well. 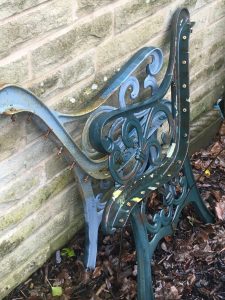 The slats were a challenge. Without the previous ones to work from I guessed at the sizes required, though I don’t think it would have made much difference. However, the holes did make a difference. I discovered that the holes in the bench ends were not uniform, and some of them were as much as half a centimetre out. I also discovered, though this is hardly news, that there is no “give” in cast iron, so if the hole in the slat was not aligned with the hole in the cast iron, it would have to be re-drilled.

Anyway, I painted them fire engine red, and started the tricky process of inserting the correctly drilled slats in the right order. This was not like one of those plastic puzzles where you can slide the tiles up and down until you get them in the correct order. If a slat was out of order it would often mean the removal of two or three other slats or even starting again. I am sure a professional DIYer would have planned this in advance, but I am not that person. I got it done eventually, and tightened the nuts which required significant dexterity. Finally it was done, and it looks impressive even if I do say so myself. Next? Well not another bench for sure. 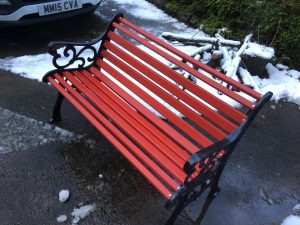 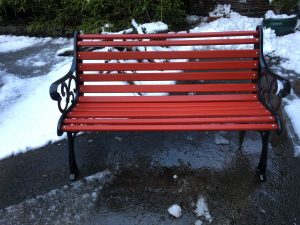 I bought a trail camera and have finally set it up to record the presence of wildlife in the garden. Badgers and foxes have been seen quite close by, but I’m not sure that they would venture this side of the railway line. It has also been suggested that deer might frequent the area near the vegetable patch, but the only way deer will appear is if they are parachuted in, or they are accompanying Santa’s sleigh. The first night has so far been inconclusive, as it was so cold that the batteries died. Rechargeable, low discharge replacements are on their way! I will let you know how it goes in the next edition.