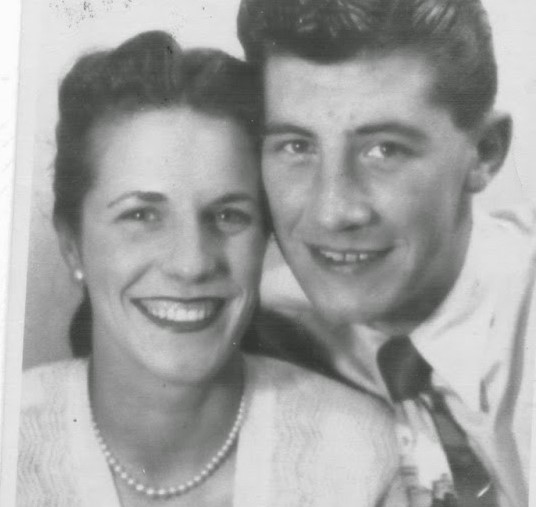 A Load Of Baloney

Well, its been another eventful few days, including a whirlwind trip to Ireland. For those of you that don’t know, my mum and 3 sisters were all in Ireland for a week – something that was arranged as part of my mum’s 80th birthday celebrations. So I decided that a week was way to long, and went for a day.

I arrived on Thursday, and they were a little late picking me up at Shannon airport. Jane, my middle sister, had driven over with my mum, so she was in her own car. A car that was undoubtedly familiar to her. In the back was my eldest sister Lisa, who had a map, baby sister Fiona, without a map but with a sharp tongue, and my mum. I was in the front, but with no navigational responsibilities whatsoever. Apparently, in the previous few days they had been driving around Connemara for hours, until Jane remembered that she had a Sat Nav in the boot. Fiona had wondered about the fitting on the windscreen. I guess she assumed that it was for a camera in case they do another series of Car Share.

Anyway, we drove around the lanes of Kiltormer and Killoran, finding the graveyard where my mum’s grandfather is buried, and leaving a rock on the grave. Apparently this tells the next person to visit, and the person underground, that someone has been to the grave! We then went into the market town of Ballinasloe that my grandmother use to go to on a pony and trap. We had lunch that would come back and haunt my big sister Lisa later, and then went to the cottage at Spiddall, west of Galway. The cottage was tiny, but serviceable, and a stones throw from the rocky beach that was constantly battered by the ocean. My mum looked on this stretch of Irish coastline in much the same way that I would look at the Caribbean coastline. Ireland is, of course, synonymous with the colour green. However, after a few hours in this particular corner the most common pastel was grey. Grey in the clouds, grey in the fields and grey out on the ocean. Jane insisted that the the sun would burn it off very soon. We went through the book that I gave my mum for her birthday, filled with pictures and memories from her childhood and beyond. She actually made her own wedding dress, though not the veil, having bought the material from Lewis’s in Manchester, and the newspaper cutting from her wedding day is so detailed it evokes memories of a much grander age when such occasions truly deserved to be remembered. She did point out one inaccuracy, they did not fly directly to their honeymoon in the Isle Of Man, instead they spent the night in their flat in Sale. 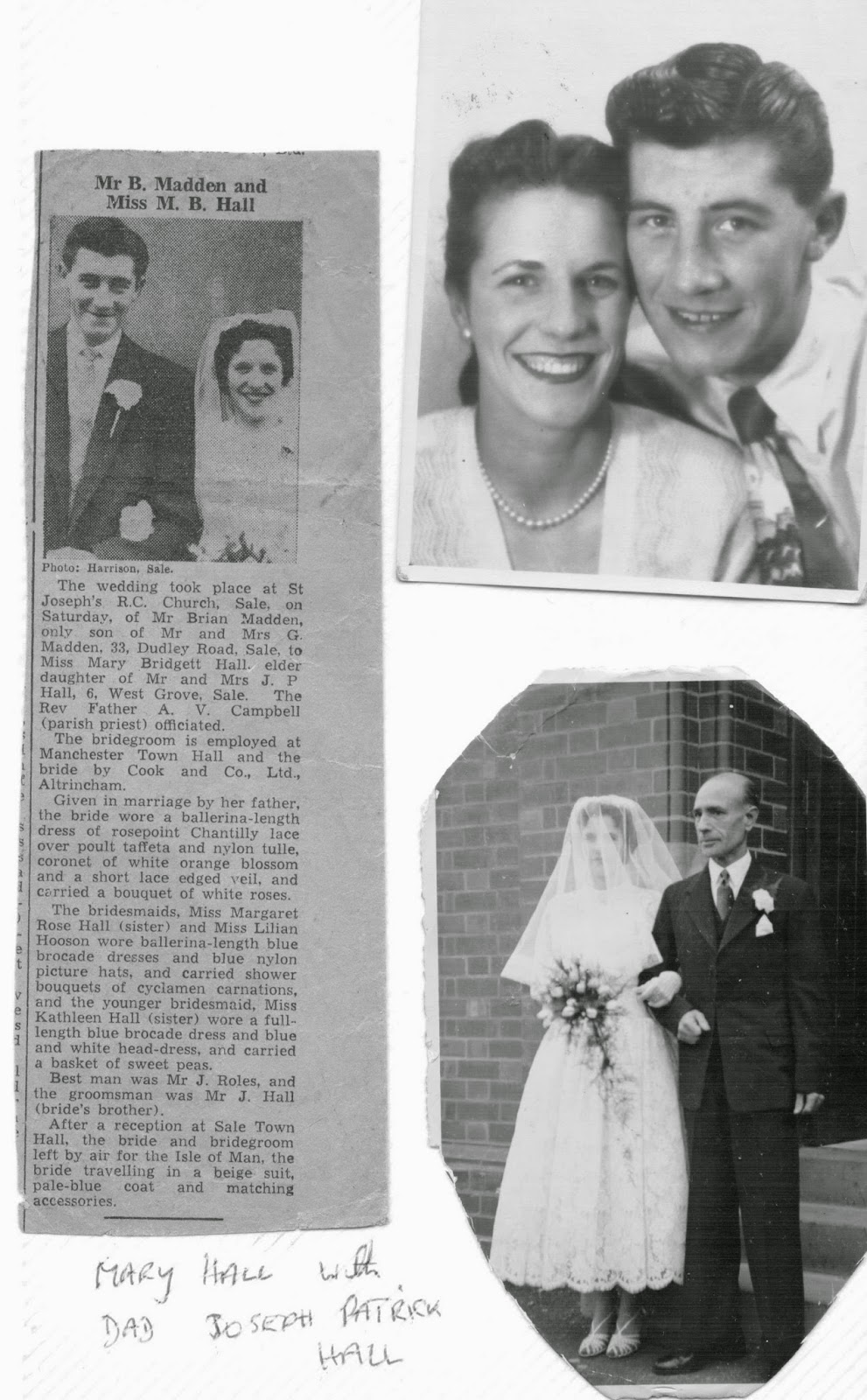 My mum is still sprightly into her 81st year, and she must be proud of bringing up four normal children, well perhaps apart from Fiona but you are bound to take your eye off the ball at some point, who have all given her grandchildren, and later this year she will become a great grandmother.

So that night we walked into Spiddall, braving the wind and rain to find food and Irish music. I had a glass of Granny Mary’s Red Ale which seemed appropriate, but then Lisa got struck down by either a migraine or food poisoning so she went back to the cottage with my mum. Jane, Fiona and myself went to a couple of other pubs for some Irish music, then headed back. The following morning, after a hearty Irish breakfast, we headed to the shrine at Knock on the way to dropping me off at Knock Airport. Knock is world famous for 15 people having a vision at the same time. I think it was of the Virgin Mary, but it could well have been a potato that looked like the face of Jesus (the Irish are also fanatical about potatoes). Anyway, Knock is a very spiritual place, marred only by the row of souvenir shops that would not be out of place on Blackpool seafront, The shrine itself is inside the Chapel, where mass is a constant. Every hour on the hour. Then there is a hill that looks like Calvary, a basilica, and various statues. It struck me that they would be better off making it into a theme park, with guests boarding a train like ‘Its A Small World or the start of the Charlie And The Chocolate Factory ride at Alton Towers. They could have maybe four masses taking place at the same time, though staggered so that as the train takes you from one part to the next you would never lose your place in the service. That way, you wouldn’t have to wait an hour before being able to enter the Chapel where the shrine is! I thought this was an excellent idea, but the devout Catholics in the family thought that I was a blasphemer! I also refused to buy a plastic bottle of holy water!

Anyway, I returned through Knock airport which could clearly not cope very well with three planes departing at the same time, I guess my 10 Euro departure tax will go some way to building a better waiting lounge.

Earlier in the week the rain and wind made cycling a problem, but I did manage to hit the road on Tuesday. I went up to Chapel Golf Club, but by the time I got back I had a massive puncture. On Wednesday I got the Bike Factory to fix it for less than a tenner. Absolute bargain.

And speaking of modes of transport, there have been some remarkable developments regarding the silver car. I was supposed to get an email from Robyn Noone at Renault UK last week, stating that they intended to do nothing about it. It never arrived so I chased them up on Monday. Eventually it came on Thursday. In the meantime, I had sent all of the details to Autoexpress, as well as to Mr Kenneth Ramirez, Managing Director of Renault UK. As the email from Robyn arrived, so did one from the office of Mr Ramirez, saying I would get a response within 8 hours. And what a response it was. Being away I asked Sally to contact Robyn, and this is the reply…


Thank you for taking the time to contact me this afternoon in regards to your Dacia Duster and the email your husband had sent to our Managing Director, Mr Ken Ramirez.
As per our conversation, I would like to confirm that your vehicle has been built to factory standard and we have no concerns over the surface oxidisation seen on the under body components. The oxidisation seen on your vehicle is visual only and does not affect the durability or performance of the vehicle.
As discussed, Dacia UK will not be accepting a rejection of this vehicle and the courtesy vehicle provided by Renault Manchester will need to be returned by 12:00pm on Saturday, 23 May 2015 and your own vehicle collected from the dealer premises.
I regret that I am not able to be of any further assistance on this occasion. However, should you have any other concerns, please do not hesitate to contact Dacia Customer Relations on 0344 335 1111 or via www.dacia.co.uk Our dedicated Customer Relations department is open from 9.00am to 5.30pm Monday to Friday, excluding bank holidays. On Wednesdays we are open from 10.00am.
Thank you again for taking the time to contact Dacia UK.
Kind Regards,
Robyn Noone

So, not only do the Renault or Dacia factory standards allow such rust to be evident on brand new cars, they also fail to see the issue with a brand new car being rusty at all. The demands regarding the courtesy car were the final straw. This was my response…

I am appalled by your attitude.
1. The courtesy car was delivered to me when you picked up my defective car.
2. I will hand over the courtesy car to whoever wants to pick it up.
3. I will be rejecting the car as per my rights detailed in sale of goods act.
4. All this now has nothing to do with you (Renault UK) so I will be dealing with Renault Manchester and your chief executive.
5. You may hear from auto express who are keen to publicise your shoddy attitude and customer service.
Regards
Michael Madden

She got off lightly. If I was not struggling with Wifi in an Irish bar at the time she would have got a proper diatribe.

She also failed to CC Mr Ramirez, so I sent my own response to him…

Sir
I am appalled by your employee’s response, and the admittance that your factory standards allow this kind of thing.
However her admittance that there is visual oxidisation is all I need to use the sale of goods act to prove that it is not fit for purpose as a ‘brand new’ vehicle.
Her demand that I return the courtesy car and pick up my vehicle is a joke. I never asked for a courtesy car. If you want it back come and collect it. I will be rejecting the duster so do not need to collect it.
Check your FB page and follow auto express.
Your company will be getting some richly deserved bad publicity regarding this.
Regards

Anyway, the following day I rang Steve Earle at Renault Manchester and he was much more sympathetic. After all, he has been sent a rust bucket by Renault UK. His only mistake was to sell it to me! He said that he had escalated it to his GM and he would get back to me next week. To be fair, he is getting married so will be out of office until Thursday. Later that day he actually called with another update, after he no doubt received Robyn’s email. He assured me that he would not leave us in the  lurch, and that it was fine to keep the courtesy car until after the Bank Holiday. Then it got interesting. He said that perhaps it was time to start looking for another car as I shouldn’t have to have a new car that is so rusty. At first I thought he meant a replacement Dacia, but no. He said that he knew I would accept a replacement, but to be honest the same problem with rust would probably happen again!

So there you have it. We have saved the voicemail message that he sent, just in case it goes legal. But as long as I get reasonable compensation, plus a full refund of my part ex and the £100 deposit (I haven’t paid any finance as yet), then I will be happy. Needless to say my next choice will not be a Dacia, or indeed a Renault!

If anyone is interested I am happy to print the voicemail verbatim in the next edition!

The pictures are also on the Dacia UK website, and there have been some interesting responses as well at least one other person with very similar, if not worse, rust.

Finally, a new feature. Ask Zac. Fiona believes that a conversation with Zac is worthwhile no matter what the subject, and he does seem to have an opinion on everything. So she asked me to ask him what he thinks about alien abductions. Not surprisingly, he was very forthright.

It’s a load of baloney. I think there is probably life on other planets, I just don’t think anyone has ever been abducted by them.

If you have any questions to ‘Ask Zac’ just let me know and I will happily print his reply.