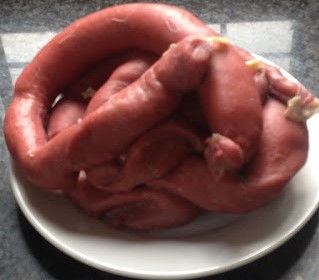 Preparations for The Raven are well under way, and props are a key part of the show. Hence, on Saturday morning I boiled a packet of spaghetti and mixed in a load of red food colouring. The resulting mess was horrible, then I put it through my meat grinder and into hog cases. The finished intestines are quite realistic, and absolutely disgusting to the touch. Don’t sit on the front row – that’s all I’m saying! 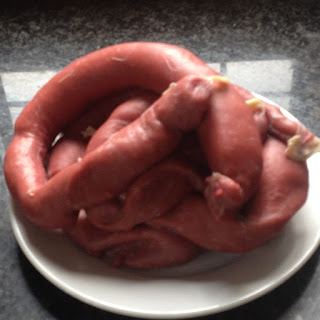 After intestines it was on to the promotional video for the Buxton Advertiser. Ideally it would have been in costume with makeup – but we had to improvise.

It was Whaley Bridge carnival on Saturday. Even with the weather it was a relatively quiet night in the village, and there are many thinking that carnivals have had their day. Hayfield have had 88 consecutive carnivals, but even that tradition may not last much longer according to some locals. Maybe they just need a revamp. Maybe a joint Hayfield / Whaley Bridge carnival, with transport laid on between the villages. Another problem is that the Water Weekend ends up at the canal for its showpiece, and the carnival now ends up at Whaley Club. The pubs’ involvement has been minimalised, and perhaps this has contributed to  less of them dressing up. Who can forget the days of the Viking ship? Certainly not Whaley Bridge Cricket Club! So perhaps we should introduce an event that is absolutely focused on the pubs. I have spoken to at least one ex landlady about the idea of a Whaley Bridge Madri Gras, and she thought it was a good idea. I even know a very good New Orleans style piano player!

Anyway, I mused upon that as I headed for Marple on my bike yesterday, and this time I continued all the way to High Lane. It was around 12.45 pm when I reached the Bull’s Head, and guess what? It was shut. It looks an idyllic spot to have a drink overlooking the Macclesfield canal, but no such luck. Venturing into the village I also discovered that one of the coffee shops had long since closed, and the other just wasn’t open at lunchtime, which seemed a bit odd. I shall persevere, but I am always open to suggestions.

I upgraded to Sky Fibre last Friday, or so I thought. I checked my line speed and it varied between 2.5 and 3.5. I was promised 38! Yesterday I got an email saying I had already exceeded my allowance (which must have been difficult at those speeds) and would be automatically upgraded to Sky Fibre unlimited if it happened again. I thought I would be proactive and upgrade it anyway, but the online link didn’t work. So, I rang Sky and they arranged it. I then asked them to look at my line speed, and they said they couldn’t as I had now upgraded to Unlimited, and it would take 24 hours to kick in. FFS! Its not a different broadband, just a bigger allowance. Anyway, my line speed was up to 36 this morning. Now it is back down to 3.5 again.

I went to Manchester this morning for a follow up with my consultant. He said I should have a scan, and he referred me to the Alexandra at Cheadle. They faxed the referral, then told me I should call BUPA to get an authorisation code, and then call the Alex, which I did. The Alex said I needed to email the form, so I said that the consultant’s office had done that this morning. They said they had not received it, so I rang the consultant’s office. They confirmed it had been sent, but they sent it again just in case. I rang the Alex again. Still not arrived. FFS. The Alex said they would ring the consultant’s office. I haven’t heard back. FFS. In this day and age why don’t things like that just work! Maybe they are just trying to make private healthcare more like the shambolic NHS.

And speaking of the NHS, don’t Ask Zac this week. I asked him how school was yesterday, and he said it was the most uncomfortable day he had ever had. They had the sex ed talk, and they even had to watch the girls’ video. So what did he learn? Well, the most disturbing thing was about balls. Apparently, if you play too much sport your testicles can get tangled, and you have to go to hospital to get them untangled. I’m not sure he was really paying attention!