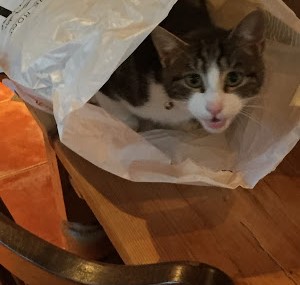 When Zac went to Taxal School the question of lunch was always a straightforward one. He would take a lunchbox filled with a sandwich (with nothing on it), crisps, either grapes or an apple (peeled and sliced), and a drink of water. More often than not the lunchbox got left at school, but after a week or so we had a rounding up exercise, gathering as many as five of Zac’s lunchboxes complete with uneaten fruit and bread in various stages of decay. At Chapel it is not so simple. The schoolbag stays with the child all day, so Zac does not really have a lunchbox any more. I have tried to put a smaller version in his rucksack, but the result is inevitably the same. Last weekend I emptied the lot. It was not a pretty sight. There was a schoolbook that had to be put on a radiator to dry. That will hopefully alleviate the smell. There were four bags of grapes, well they used to be grapes, now they were rotting and fermenting, probably not far off being wine. A number of bags of apples oozed a brown liquid, and then there were the socks. The socks were damp, though I am not sure whether this was with regular rainwater, or some of the grape and apple liquid. Either way they stank of rancid fermentation. The odd thing was that they were odd socks. One football and one school. No idea where the other halves of the pairs are. Once emptied the bag went into the washing machine, and I await the next inspection in a week or so.

Done a lot of cooking this week. Chocolate Pie that was a little more difficult than I thought it would be, and then there were pumpkins! As mentioned previously there was pumpkin pie, pumpkin soup, and pumpkin chilli, and now I embarked on a variety of pumpkin muffins. These had less fat than normal and the pumpkin puree gave them a very sticky texture. I flavoured some with cinnamon, nutmeg and ginger, some with coffee, and of course, some with chocolate. Zac loved these, though he has meticulously avoided the coffee ones. Today is a cold, wet, blustery one, perfect for experimenting with Mexican lentil soup, adapting a recipe from the Barefoot Contessa Ina Garten. Grated cheese on top of a steaming, spicy bowl…Mmmm! Later today its another one of Ina’s meals with home made fish & chips, and tomorrow its slow cooked brisket – got to do the dry rub in the next few minutes.

Not too long until Christmas, which has started with Sally doing a mass rearrangement of various cupboards (she also got around to throwing away all of those orphaned pan lids – though at one point she considered putting them on eBay!). Anyway, in one cupboard there was a shortbread tin, and whatever was inside the tin rattled. I opened it, and lo and behold, five of the jars of spices that I believed were lost forever stood side by side. There will be an infusion of ground cloves, sesame seeds, mixed spice etc over the coming weeks!

Monday sees a historic televisual event as Sally stars in the Sky One show After Hours. Some of you may know the circumstances, as Sally took Ole to be an extra in the show, which was being filmed in Tesco at Handforth Dean. Anyway, they were a few extras short, so they asked Sally, ‘Oh no, I couldn’t possibly, that’s not why I’m here….oh go on then, just this once’ and she found herself picking orange juice off the shelf as Ardal O’Hanlon looked on, bemused. The show has not had good reviews to date, but I fully expect this to change on Monday. Helen made the mistake of saying, ‘Its not all about you, Lady M,’ but I think she will soon discover that Lady M is exactly what it is all about. By the way, I’m not sure whether Ole makes an appearance this week too, his part seems to have been overlooked! If you are interested I think its Monday at 9.30pm on Sky One.

There should be some good pictures in the next edition of the blog, with Zac heading to deepest darkest Staffordshire for his Lamborghini driving experience next Saturday. I have taken out excess insurance just in case.

I was holed up in the very lovely Colwick Hall on Monday night, and I spent the time doing more voiceovers for IT courses. Strange how certain words trip you up when you are trying to record something. In this case it was ‘tasks’. Its an easy enough word to say, but when I had to do it clearly, on a recording, it suddenly became a real tongue twister.

Sometimes it is good to know that you are heard, and an ex colleague of mine followed up on my recommendation for the best kebab shop in the world – Al Aqsa in Longsight. Good to also know that it is still as good as ever!

Here’s an interesting one. Have you ever gone in to a supermarket, bought a load of stuff, then got home and realised you have lost something? Maybe a tin of beans, maybe a lemon, or in this case a Poinsettia. In my view, it is my fault, and the loss of a £1.50 plant is not worth a return trip. Or was it a £2.50 plant? Hold that thought. If it was me, and I really wanted the plant, I would buy another one. So what would you do? I know someone who not only returned to the shop, she also persuaded the assistant that she had forgotten to take her Poinsettia home two days earlier, and she was now going to collect a replacement at no extra charge. As Rolf would say, ‘Can you guess who it is yet?’ Not content with that, she also decided that the £2.50 version was definitely the one that she had left behind, and not the slightly smaller £1.50 one. I will let you know if and when the original turns up! I doubt whether it will be returned.

Finally, we went to see Phoneix yesterday. Mother and baby are doing really well, unfortunately we did not take any more pictures. Just so you don’t feel left out, here’s a picture of Bagpuss! 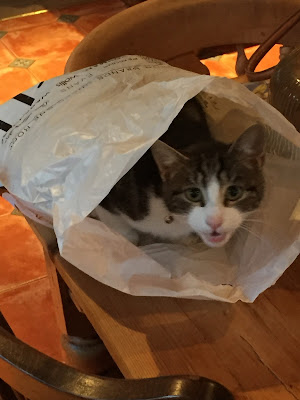