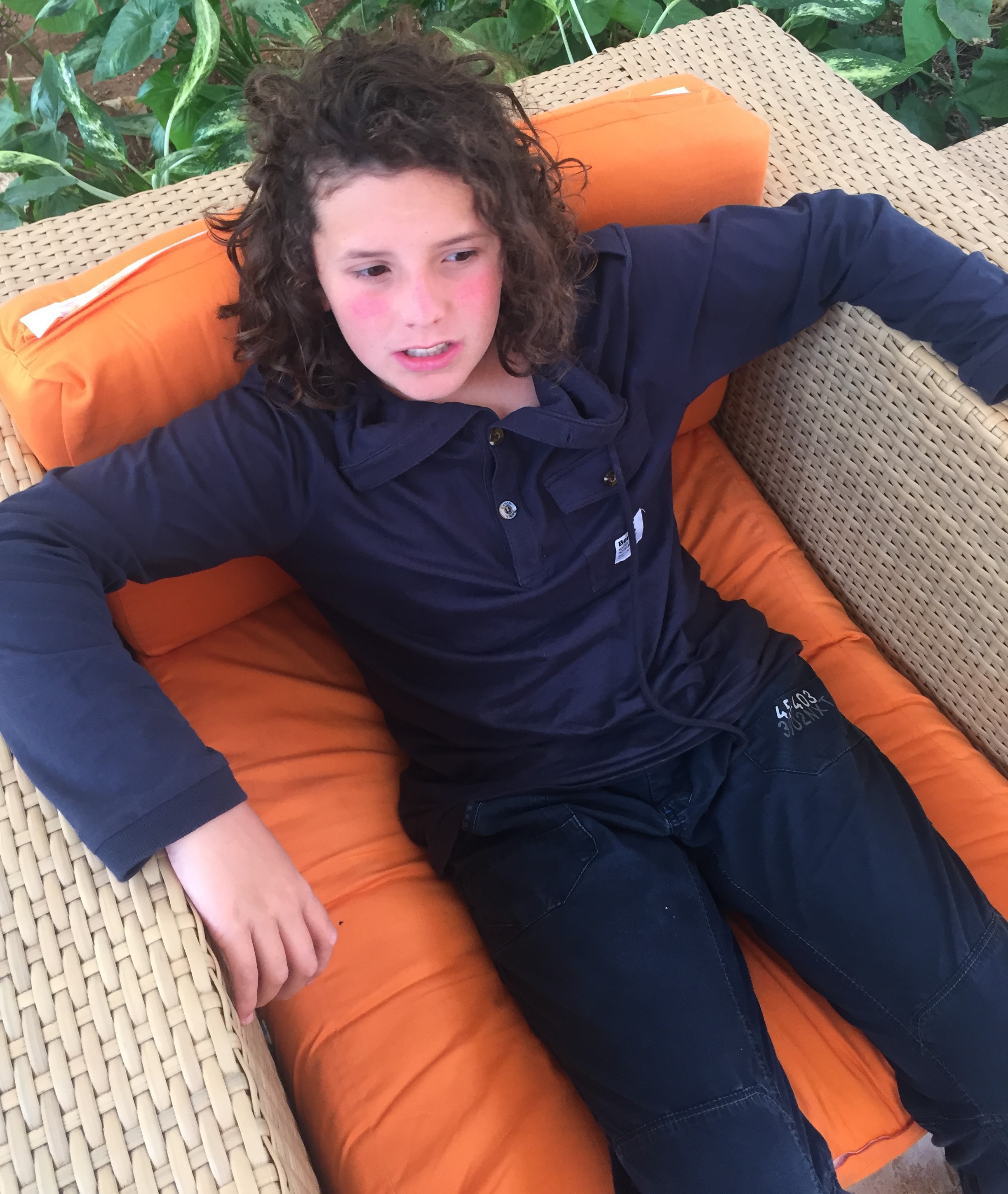 Riding a Unicorn to Venezuela

Ole lost his home work this week. He was trying to install a printer and all of a sudden his rich text format document was full of gobbledegook. Some might say it was like that before, but now it was ruined. I tried several programs that claimed to be able to fix corrupt RTF files, but to no avail. Several hours later it was a lost cause – and we had to start recreating it from scratch. Computers are supposed to make things easier, but when something goes wrong time seems to lose all of its meaning. Unless, of course, its something obvious. Sally bought new cartridges for the printer. I tried to print but the printer was in an error state. I looked, and sure enough, everything that could be open was open. So I closed it all but it was still in an error state. It was then that I noticed that Sally had ONLY opened everything that could be opened, without bothering to install the cartridge.

This week was knee operation week. It started on Wednesday with a pre op assessment, in which I had yet another MRSA scan, followed by various tests, including blood. And therein lies a problem. As soon as someone gets a needle out my veins disappear. The first nurse admitted that she had only been taking blood for about 12 months, and after looking at my shrinking veins she said she wasn’t even going to bother. She passed me into the hands of a more experienced practitioner, and quick as a flash the first sample was taken. Then the vein shut down. She was flummoxed. She then called in the Alexandra’s version of a vampire, and she managed to get the second sample. Three nurses and two samples and I was done, except for urine which was, of course, a piece of piss.

And so on to Friday. the big day. I was a bit nervous, not helped by setting off late for my appointment. I’m not a morning person at the best of times, but Sally kept the conversation going, whilst I listened to what I thought she would want me to hear, as opposed to listening to everything. A very different experience, you should try it. I arrived at the Alexandra about half an hour late, but it was a fairly chilled out early morning.

Sally happily slurped a coffee as I got acclimatised to my room, and of course I was ‘nil by mouth’. A friendly caterer came and asked me what I would like post op. That was interesting. No menu, so I guess I had a free choice. Thinly sliced cheek of a particularly jowelly rhinoceros? Russian Caviar? Sumptuously rich chocolate cake? But then she clarified. Soup or fruit juice? Soup please. And do you want a sandwich? There’s cheese, chicken, tuna or egg. Egg please. White or brown? Brown please. Tea or coffee? Coffee please. What time will you be ready? No idea. Oh. Well we’ll bring it when you get back from surgery. Thanks. It passed the time and was really the last thing on my mind as I waited for major surgery. Ok – it wasn’t a heart transplant, but I would be out for about 3 hours.

We had some time to kill, so Sally set about remedying the tumble dryer saga. She bought one from Tesco, an Indesit model, but it didn’t work. It didn’t dry clothes, a fairly basic and fundamental requirement for a dryer. They sent out a repair man who replaced the pump, but it still wouldn’t dry clothes, so she asked for it to be collected. It still sits uselessly in the garage, meanwhile we needed a replacement. Sally started searching on her phone, interspersed with several visits to Facebook, and after 45 minutes she was still nowhere near getting one. Somehow it was down to me, as if I didn’t already have enough on my plate, but 10 minutes later it was ordered, paid for, and scheduled to be delivered on Tuesday. And not a Facebook post in sight!

Sally went on her merry way, my consultant arrived and gave me dire warnings about potential complications, but he was confident in his own ability, the downfall of many a pretentious sportsman.

I walked to the theatre where I was greeted by Makhoun. I think that was his name – I met so many people including Joe, Heather, Donna and Cherry. Anyway, Makhoun was of middle eastern appearance and he was very friendly. My anaesthetist said that there was a slight delay whilst they checked all of the equipment. High Tibial Osteotomies are not an every day operation, and they involve a saw. I imagined a Heath Robinson contraption being brought out from beneath a dusty cover with a rusting saw that needed plenty of oil and grease. Fortunately, I would not have to view what was beyond the theatre door as I would be out by then. In the meantime, Makhoun asked me all manner of nice questions to relax me. Where are you from? Have you had any snow yet? Who is waiting for you? This may be wrong, but my questions in return would have been ‘Have you been back to the Middle East recently? Have you been radicalised? Does that make me slightly racist. Probably not. In fact I’m sure Daesh don’t recruit only those of Middle Eastern appearance – that would make them racist. In fact it would be better for them to recruit those of a Western European visage, or maybe Slavs or Scandinavians. And what about Americans? I suppose it would be difficult to get a suicide belt in XXXL. There’s me being racist again! Before you all write in – its a joke. Makhoun was friendly, courteous and professional, and then it was time. The anaesthetist started his work. He said the first bit was to make me relax, like I’d had a couple of glasses of wine. Then it got quite heavy, kind of bringing home that this was not a trivial operation and it needed a lot of anaesthetic. It was quite painful, and then I prepared to meet my maker. Come to the light, come to the light, but rather than the gentle tones of a friendly angel these words were spoken in a broad northern accent, and I realised it was Sam Allardyce beckoning me to the Stadium Of Light. He wanted to sign me as an impact player off the bench. I told him I would get back to him, but at that point my Unicorn was waiting to take me to Venezuela. Although it spoke in a gruff voice its name was Judy. Turns out it is a transgender Unicorn, just waiting for the final part of its operation. It was a quick journey, but then at security the Venezuelan mafia asked Judy, sporting a 5 feet long sharp pole sprouting from her nose, ‘Do you have anything that can be used as a weapon or looks like a weapon?’ She just shook her head, disturbing a couple of light fittings with her horn as she did so, and we continued on our way. We ended up in a large room where I was to test my new leg. My old one came off rather easily, like those on Action Man dolls, and I replaced it with one that had been realigned similar to the operation I was about to have. Twisting By The Pool by Dire Straits started, and I ran around in ever decreasing circles. On the wall a clock counted up from zero, and when it reached 42 seconds everyone disappeared. My original leg was back in place and I was ready for dinner. I didn’t realise before, but Venezuelans are quite partial to fresh unicorn meat, and Judy was served up in a piquante peppercorn sauce. Back in Cheadle the Alexandra laid on some fabulous entertainment, with Elvis Presley and Tinky Winky from the Teletubbies performing a duet of Onward Christian soldiers, followed by Duncan Bannatyne bringing to life Emu, the infamous bird of Rod Hull fame. This faded from view as I opened my eyes, and I was wheeled back to my room. After all that excitement I was glad to get back to normality and egg sandwiches. Sally came to see me, but she disappeared, complaining that I was drowsy and not making much sense. This augurs well for the years of fading memory and infirmity!

But, it was only around 5pm – surely there would be a steady stream of visitors later? Sally coming back, err, apparently not. Gabi with her new found ability to drive without Pixie? Perhaps not. My good friend Clive, probably out on the pop in Cheadle anyway? Hmm, not quite near the teetotal Alex! So I got some rest, made a couple of calls and settled down for the worst night’s sleep ever. My right leg (the good one) had a pump on it for circulation. And every 42 seconds it induced a muscle spasm akin to someone pinching the calf very hard. So I got several batches of sleep, all around 42 seconds each, before I finally overcame it having had another dose of codeine and a blood pressure check.

The morning came and I was able to get to the loo aided by my crutches. I had breakfast – I could have murdered a bacon sandwich but the previous day, for some reason, I had ordered Weetabix, yoghurt and prunes, so that’s what I got. The consultant came and said he noticed the difference straight away. The physio came and was impressed by my range of movement. I negotiated a couple of hundred yards on crutches to the pharmacy, got my drugs and was on my way. But wait, what are those needles for? Stomach injections, to prevent clotting. No one mentioned that, and I have a well documented case of trypanophobia. Its alright, Sally would be able to do it. Great! We got home and I delayed the injections for as long as possible. The first one went in and blood spurted out. Ok, maybe not spurted, but there was definitely a drop. And I have two weeks of these. I dozed through several football matches, and at around 11pm went to bed. Wow! At some point in the previous six hours the remnants of the morphine must have said farewell, and I was in agony. So much so that I thought I would be sick. I somehow made my way to bed, downed more codeine and settled down for a surprisingly good night’s sleep. Today I have no intention of getting out of bed – though attempts to procure a bottle have so far been beyond me so I guess the loo will have to be visited.

My consultant said  that I would regret having this done for the first six weeks, and yesterday I laughed at him. Today I am not laughing! Except at Zac.

Yesterday he wanted to go to the Taxal School Fair, but with a very precise aim.

‘Mum, will you take me to the Christmas Fair?’
‘Yes, of course’
‘Right, but I only want to be 20 minutes, so don’t get sat down and comfortable in that chatting room’.