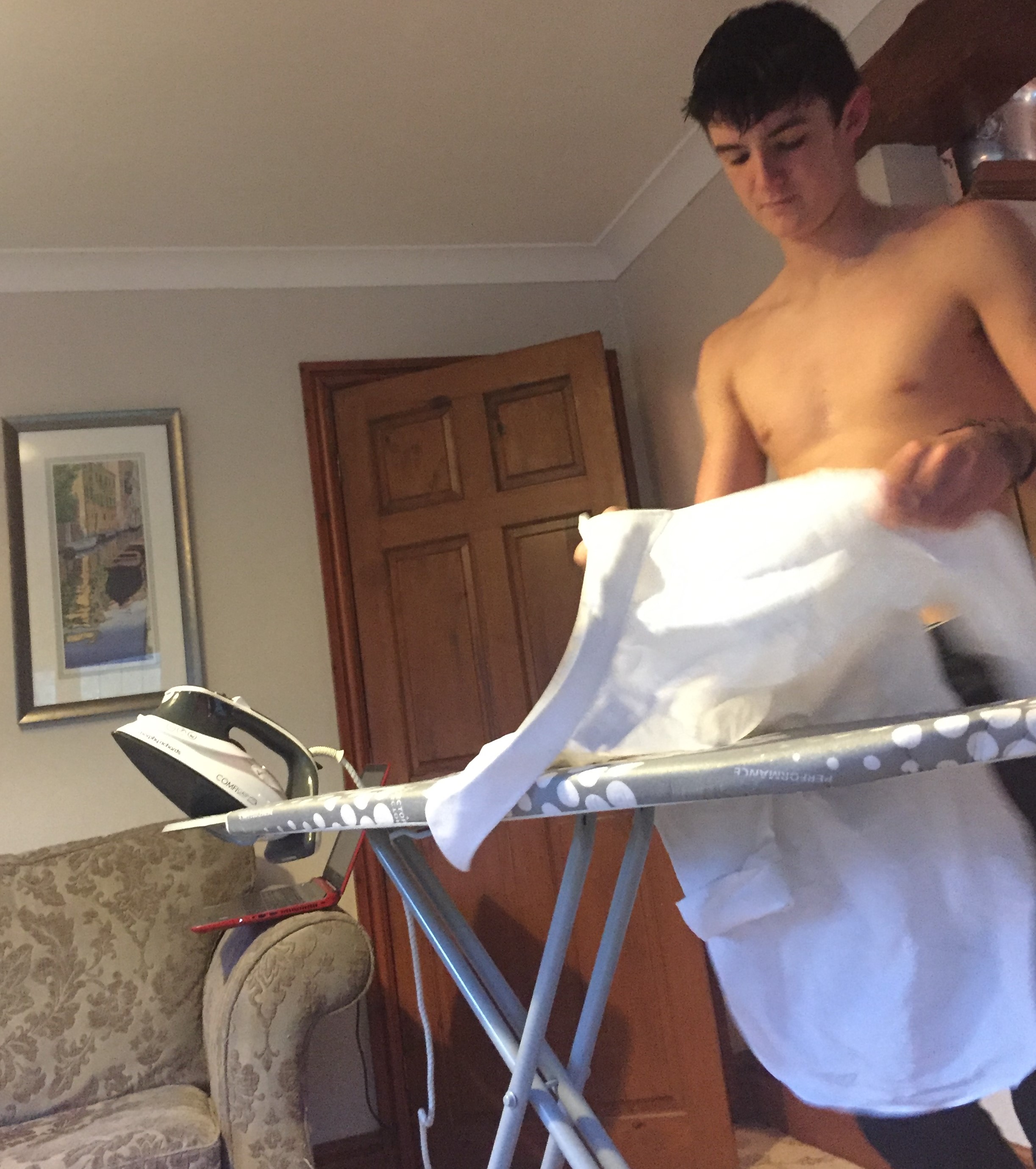 Things started to settle down around the operation, and I discovered that cats are either very empathetic, or they know a captive audience when they see one. They have been taking it in turns to make my bed their bed, allowing me to stroke them with both hands for as long as I want. Very thoughtful of them. Anyway, by Monday I had established my home office on the settee in the play room, sorted out a few contracts, spreadsheets and reports, and spent hours on the phone. Productivity probably went up as I didn’t have the stress of a 90 minute journey to Nottingham and at least the same coming home.

Its easy to overlook little things when you are fully fit, but when you are on non weight bearing crutches molehills quickly become mountains. An ironing board, casually left up as evidence of activity in that area stood between me and the loo, me and the kitchen, and me and virtually anywhere I wanted to go. A small pile of clothes left on the stairs was a hazard that could have catastrophic results if my crutch got tangled up in it. And drinks? Well, I managed to set up a system, helped by the ironing board, where I transferred them from one surface to another without having to use the crutches.

Monday lunchtime came, and Sally had left home made soup. Hmmm. I sent her a message asking whether she had actually put any seasoning in it at all, and unusually for me, I had to leave half a bowl. Inedible! Sally must have suspected that I was right as she threw the rest out without even trying it herself. There is a myth that she can’t cook. This really is a myth – she will be cooking Christmas dinner as usual, and it will be thoroughly enjoyed. Generally, if its not cremated, its good food. The soup was definitely an exception. Like greasy vegetable water.

‘I’m trying my best,’ she insisted, and she is right. The problem is that there are two adults in the house, and with one man down the two ‘kids’ should have stepped up, and they couldn’t.

I was starting to get about quite well, whilst still keeping up with calls and other work stuff, and noting my little triumphs. The act of putting shorts on is a prime example of this. My left leg is longer than my arms, and at the moment it has very little bend in it. I therefore have to engage in a game of hoopla until I can hook the left leg of the shorts over my left foot. If I can do it in less than 3 attempts I win!

Sally announced that there were three new flavours of home made soup in the fridge, which was odd as I had not seen her in the kitchen. I asked her where she had got them from and she simply replied, ‘Tesco’. I have to say that if Tesco really are making home made soup – they need to change their cook. The first one was as insipid as Sally’s. I didn’t bother with the other two.

Tuesday saw a welcome visit from Gabi and Pixie, and I think the little one felt my pain. Either that or she had wind. My mood wasn’t cheered by the postman, who brought notice of a speeding conviction, ironically for an offence on a stretch of road that never goes faster than 5mph, except for the one day that I drove along it having visited the pre op at the hospital first, and therefore the rush hour traffic was long gone! Later that night, the legend and good friend that is Clive Ashton came calling, and we spent a few memorable hours chewing the fat. We discussed beer, pubs, knees (of course), wine, homeless people, past Trips, and the prospect of working in Spain. Sometimes there is an obvious answer but the person asking the question can’t see it. If you are struggling with what you are doing, and you will benefit from an easier job and a warmer climate, even if its just for a few months, the answer is right in front of you! But Clive doesn’t need me to tell him that!

It had been a busy time, and it was perhaps this that triggered the agony of the final hour or so of the day. I was fine lying horizontally, but any attempt to get vertical led to severe throbbing in the area of the wound. I eventually made it up to bed, having switched off umpteen lights, including a multitude of battery operated ones all with a Christmas theme, and navigated another horrendous obstacle course on the stairs, but it was a restless night, By Wednesday morning my leg was very red and very warm.

I took the final sip of water from the glass that Sally had left for me four days earlier, trusting that my body would be strong enough to fight off any chance of dysentery, and considered what to do. For now I resolved to rest more than previous days, and hope for the best.

Sally pondered what to do with a considerable sum of money that needed to be dealt with. ‘I think we should use our ISIS allowances whilst we still can,’ she decided. Donald Trump will be pleased.

That evening I realised just how useless kids can be. Ole was trying to make his own tea, but it was just a barrage of questions. Where’s the Loyd Grossman sauce? Where’s the spaghetti? Where’s the meatballs? This last one was particularly infuriating as they were in the fridge, where he had just looked, and when he looked for a second time, guess what?

I also had to explain to him how to make a cup of coffee. Instant coffee. Took him ages. Another great irony!

I stomped upstairs to the bathroom, manouevred around the most fiendish obstacle course yet, and then I went to bed. I remarked that the cats were still in and the lights were still on, even those outside. Once again Ole showed his ignorance. ‘Where’s the switch for the outside light? Where it’s been for the last 16 years! The cats woke us in the night to be let out. I smiled to myself and pulled the covers tighter as Sally had to get out of bed!

It wasn’t a good morning as the leg was now looking very angry. I booked an appointment at the docs for later that afternoon. I had visits from our groundsman, as well as my old friend Dennis, then Sally gave me a lift to see the nurse practitioner. She took my dressing off and commented on how neat the stitching was. She noted the infection and drew a line around it so that we could tell whether the inflammation had reduced, then gave me a prescription for antibiotics. I gave the prescription to Sally with £20 and she called in at the chemist. She came out immediately, with a package, and I thought she had worked miracles. I usually have to wait ages for the pharmacist to complete my order. I was mistaken. She had bought some bath cream. It was 25% off. So she had saved £1.88, but somehow I was £5.61 down. Not sure how that worked!

Sally made some more soup, this time relying on the staples of bacon and vegetables rather than a discarded chicken carcass. It was an improvement.

She disappeared to Leek and I asked her to get three A3 padded envelopes. She got some padded envelopes. Not sure about the three or the A3. She hurled them at me and they fell behind the settee. I think they are still there! She denied ever hearing the A3 part!

Its been a long week all around. Its not the pain alone – that is bearable or at least manageable. Its not even the non weight bearing aspect. That will hopefully change soon, and I will be able to get about and do stuff a lot more easily. The infection hasn’t helped, but there is also the uncertainty, and as I inevitably try to do more, the prospect of overbalancing or stumbling, and inadvertently putting weight on the leg that should be up and resting, increases significantly. The biggest issue is the kitchen. It is within touching distance, but it is out of reach. To even attempt to make anything would require me being upright for far too long, and so I am at the mercy of Sally, the microwave and the children (sounds like a fantasy adventure!). Everything on tv seems to mock or tempt me. Cherry pie, chocolate muffins, chicken fried steak, corned beef hash, spam fritters, yet more burgers, all scream ‘get in the kitchen and try me’. I suppose I should stop watching so many cookery shows.

So, we just about got through to the weekend with no fatalities, and a trip to my sister’s for a family Christmas as she will be in Mexico when the big day comes around. The day itself was great. Meeting sisters, mum, daughter, in laws, nephews, friends, and of course granddaughter, but the journey was a nightmare. I sat in the back seat and put my bad leg through the gap between driver and passenger seat. I sat on a sleeping blanket to adjust my height, and failed to get comfortable for about two and a half hours.

My sister is a veteran of pain and drugs – and she suggested Tramadol. Even gave me a sample – she seems to treat drugs a bit like Dolly Mixtures. Not sure it made a difference but I was certainly a bit more relaxed.

Meanwhile, Zac regaled his extended family with tales of school. ‘I’ve got three girls on the go at at the moment,’ he bragged. ‘You’re such a liar,’ Ole responded, somewhat stating the obvious, but as ever Zac had an answer. ‘That’s not lies Ole, that’s life.’ It could become his new catchphrase.

He then turned his attention to school, and in particular the desks. ‘They are covered in gum. On the first day I dropped a pencil. I went down to pick it up, and when I looked up I saw the whole desk just covered in gum. Everyone chews it and then they stick it on the desk. There was white, pink, green, and even brown gum that had expired (think about that for a moment). In a few years time the desks will just be made entirely of gum.’

The journey home was quicker, though no less uncomfortable, despite me having taken one of Fiona’s Tramadolly Mixtures before we set off. Something had been puzzling Ole, and it concerned his cousin Jake’s friend. Dan is from Australia, but he is currently living in Woodford, near Northampton, as Fiona and Peter’s lodger. I explained that he came over to play cricket, and normally he would go back in the winter to play cricket at home when it would be their summer. Ole was incredulous. ‘Its their summer now?’ ‘Yes’ ‘That’s weird. What about America?’ ‘No – they are the same as us’ ‘Alright then, what about Hawaii?’ ‘Yes, Hawaii are currently in their summer’ ‘So in Australia they have Christmas Day in the summer?’ ‘Yes’ ‘That’s just crazy’.