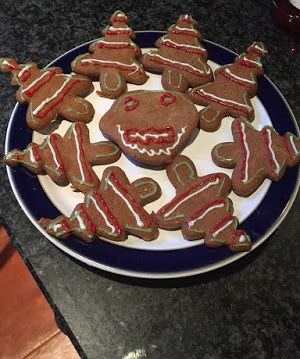 Someone once asked me whether losing forks and other cutlery was an everyday occurrence as they certainly did. They frequently tipped their cutlery into the bin with leftovers, and inevitably their supply dwindled. I had to admit that this had never happened to me, as far as I know, but I have to confess that n the last few weeks we have been losing teaspoons regularly. I found a couple in Zac’s room, but where previously we had a draw full of the little tea stirrers, even with the addition from Zac we could only muster four. So where were they all? Well, just after Christmas we decided to tidy Zac’s room. Out with the old and in with the new and all that. Sally really went to town on it, pulling out cupboards, clearing shelves even reaching into that scariest pf places, under the bed. Not only did we manage to pair up a number of previously orphaned socks, we also found three of the missing teaspoons. The tidying continued, with Sally throwing out a couple of bags of unwanted items, making way for Christmas! The Minecraft books were in mint condition and will probably end up on a For Sale Or Swap website, but they hid more of a secret. By the time the job was finished, 3 dessert spoons, two knives and no less than 6 teaspoons to go with the 3 found earlier in the day were lined up ready for the dishwasher. It soon became apparent that the spoons were used for Aero chocolate mousses, and once consumed the pot was sometimes thrown in the general direction of the bin, whilst the spoon, a more permanent item, was secreted away so that Zac wouldn’t have to do anything else with it.

Tomorrow sees the first day of full weight bearing. In theory that means the end of the crutches, and Sally for one will be mightily relieved. Its not that she hates to see me struggling along on one leg and a crutch. Her issue is the sound. Like some faulty Long John Silver as the crutch thuds alternately with the silent footstep. Its her Steven Spielberg moment, like the music in Jaws or the ripples in the water in Jurassic Park. Its been quite difficult re-educating my leg after so much inactivity. There’s an awkwardness of movement, and a lack of confidence not only in the effectiveness of the operation but also in the muscle memory. Tomorrow is the biggest test – and I’m not expecting a trouble free ride.

Its been a busy time in the kitchen, and after much perseverance I managed the infamous Christmas Biscuits. Not as good as Nana’s, but not bad for a first attempt. 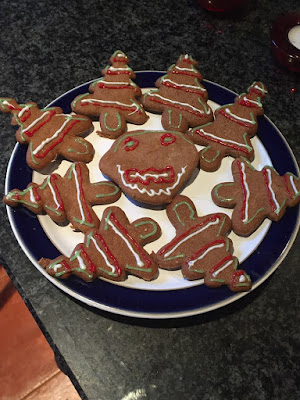 Ive also made cranberry, orange and almond sponge, brownies, digestives, chilli and vegetarian chilli, but my personal favourite is the festive apple puff, or ‘Taste Of Christmas’ as it has become known. Its really easy to make too.
First lay out a puff pastry sheet flat. Make some almond paste with the white of an egg, 50g ground almonds, 50g icing sugar and a few drops of almond essence. Stir all of the ingredients together to make the paste then spread it all over the pastry sheet. Peel and thinly slice 3 or four apples (I used Braeburn), then arrange them in three columns, overlapping them and leaving about 1cm around each edge of the pastry. Fold the 1cm edge over the apples. Most of the apples will still be visible but the pastry should now form a parcel around the outside. Meanwhile, warm 50g butter, 25g demerara sugar a handful of sultanas and cranberries with a generous measure of rum or brandy (whichever you prefer). Add 1/2 teaspoon of allspice, 1/2 teaspoon nutmeg and 1/2 teaspoon of cinnamon. Continue to simmer for ten minutes. Pour over the apples, ensuring an even spread of the fruit. Apply an egg wash to the pastry (I use the yolk saved from the egg used for the almond paste). Bake for 25-30 minutes at about 170 degrees C. Serve hot or cold.
A big bonus before Christmas saw my Credit Card subject to fraud. Sounds awful? Not at all. Tesco rang me within 9 minutes of someone having a £459 transaction declined at Argos. Whilst I was on the phone someone tried a larger transaction in the US. Tesco cancelled my card with no harm done, and so throughout Christmas I was unable to run up a large and inevitable bill!
It was a relatively quiet New Year’s Eve, but Zac and his mate stayed up late and got up early This morning had all the signs of the start of a lazy X-Box day, but we persuaded his pal that football would be a good option. We rounded up a few more, and arranged for a meeting at 2pm. Zac got ready, and at 1.50 said ‘Right, come on dad, you can give me a lift.’ I pointed out that I was still unable to drive, so he looked at mum who was not yet dressed. After a lengthy debate he announced that if he couldn’t have a lift he wasn’t going, but we put a stop to that by threatening the removal of the X-Box. After some stomping about he was ready to set off on his own, but he did have one parting shot. Clearly put out by having a day of exercise organised, he had to make his point. ‘In future do not make any arrangements for me. I will make my own arrangements’. We didn’t see him again for several hours, at which point he had gone to his pal Alex’s house and told Alex’s mum to instruct Sally to get him a chippy tea!