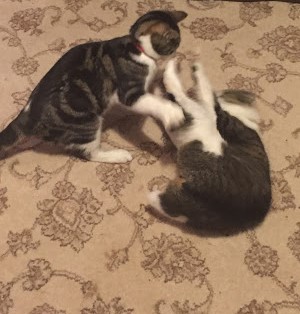 Three Steps To Heaven – But 400 Steps to Horwich End

This week has been a pivotal one in terms of my recuperation. My first few steps were painful, but I quickly got used to it. There’s still a lot of wobble, and swaying from side to side, but I’ve not used crutches for 5 days and counting. I am still using elevation and ice which presents two problems, Firstly, I’m not sure what is swelling and what is supposed to be there as a result of the operation. Secondly, after elevation, even for just a few minutes, the pain on standing is still quite significant.

I had also not walked very far at all before today. Up and down the stairs was about the extent of it, so this morning I decided to test myself a bit further. I headed to the Post Office at Horwich End, around 400 yards away, and after passing the Drum & Monkey the pain and uncertainty started to kick in. I got there in the end, and fortunately the chap behind the counter likes to pass the time of day, keeping me stationary for several minutes before I had to set off back again. Anyway, I learned that he and his wife are selling up (well actually I knew this due to the sign outside), as they have decided to retire. I certainly hope that a similarly minded couple take it over, as I would hate to have to endure the ridiculous public face of the Post Office on Canal Street.

Eventually I set off home. I was going to call in at the 110 cafe, but the journey took a bit longer than expected. Maybe tomorrow! I arrived home, travelling increasingly slowly as I descended the hill on Walters Wood, and I have been restricted to the settee ever since. Perhaps 800 yards was a bit too much, perhaps it was just what I needed. I guess I will know in the morning.

I have made good progress on The History Of Zombies, reaching almost 9,000 words and mentally confirming that the finished book will be around 30,000. I just need to crack on now to ensure that it is finished before Zac outgrows the subject matter! Looking for volunteers to sketch the cover image. Anyone any good at drawing zombies?

There has been a hive of activity as Sally and my sister Fiona plan their trip to San Antonio where trail riding will be followed by the rodeo where Pitbull will provide the entertainment. Tickets for the rodeo are interesting. Readily available in the outer seats, if you want to get a seat within touching distance of a bull’s arse you have to keep checking the rodeo website to see if any season ticket holders want to sell their tickets. Incidentally, Sally goes horse riding approximately once a week, for about half an hour at a time. The trail riding could well involve three hours in the morning and three hours in the afternoon, for two consecutive days. She will probably be sore. On the other hand, Fiona has not ridden for 35 years. I hope they are taking a wheelchair!

There was a strange scratching noise yesterday morning, and it appears that Sapphire is taking on the mantel of his owner (Zac) as the biscuit thief (actually Zac is more likely to steal chocolate – for which he has been caught red handed several times). It seems that Whiskas biscuits are just not good enough for Little Sapph. Instead he used his claws to rip a hole in a bag of Kit-E-Kat biscuits, and feasted on them until he was caught in the act. 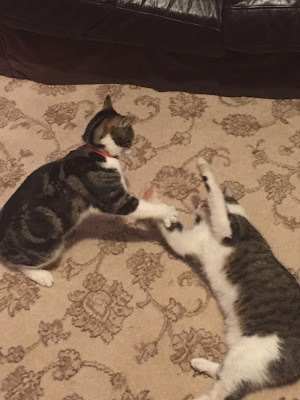 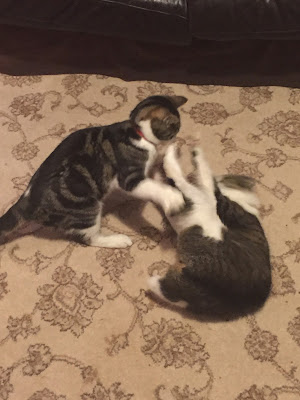 Sapphire and Bobby fighting for the biscuits

Phoenix paid us a visit yesterday, accompanied by mum of course. Anyway, she looked really cool! (Pixie, not mum) 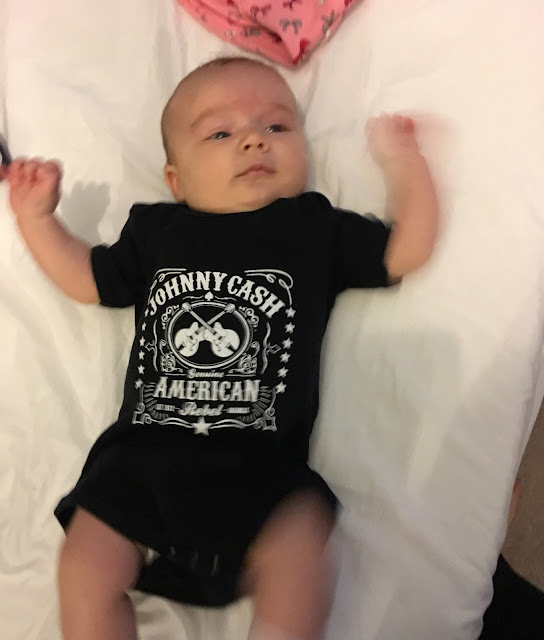 We may well be heading to Cuba in March / April, and it may be that some friends will come with us. Coincidentally, those friends happen to be the parents of Ole’s friends, to which Zac objected. It was clear that he had done quite a significant piece of analysis!

Zac wasn’t so jolly on Tuesday when it was his first day back at school after two weeks of going to bed late and missing whole mornings. He got a dry run on Monday as he had an inset day whilst Ole had to go to Aquinas, and that went ok. On Monday night he got everything ready, laying out his clothes separately all over his bedroom floor. This wasn’t a random, lazy act, he had actually thought about it and placed his clothes in the order in which he would put them on! I wasn’t optimistic about Tuesday, but he actually got up early and had a good twenty minutes spare to eat his breakfast and pack his lunch. His brand new rucksack was bulging, with different compartments for pens and pencils, books, clothes and medical stuff. Not sure which compartment the lunch went into, but I am sure it won’t be long before one or more of them are contaminated with rotting food.

Ole got a YNot ticket for Christmas, and now he wants a Leeds Festival ticket. He can’t afford it so he wants the bank of mum and dad to extend him some credit to ensure he gets one before they sell out. This is a fantastic situation to be in as when I ask him to do stuff, such as tidy his room, do his homework, fill in a job application, I have the incentive of the Leeds ticket to use as a carrot. This won’t last long, as pretty soon I will actually have to buy the ticket, so I had better make the most of it.

Sally was at her culinary best yesterday when she made cabbage and cauliflower soup. After about half an hour she stirred the pot. Should I put bacon in it? No – its a bit late now. Gabi suggested that she should have put paprika in with the oil or butter at the start of the process. Oil or butter? Sally looked puzzled. I suggested that she should put some seasoning in. At least salt and pepper. She was about to slice a yellow pepper when I pointed out that ground pepper would be better. Did you put those leeks in? I asked. Nope! Did you put any stock in? Gabi asked. Nope! At this point the cabbage and cauliflower soup was cabbage, cauliflower and water, cabbage water as Gabi pointed out. Mmm….! Reminded me of the time she made Bread & Butter pudding with neither bread nor butter.