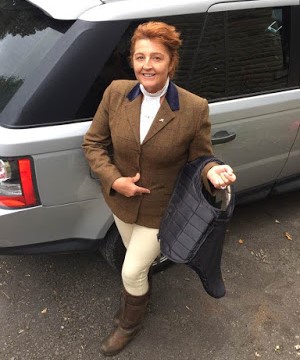 Don’t Take The Bishop To Hospital!

My brother-in-law, Peter, has been ill. Heart problems, but apparently not too serious, if heart problems can ever be considered as not too serious. Anyway, we wish him well, but it led to one of the weirdest autocorrect sessions yet on Sally’s phone.

As a bit of background, it was Saturday morning and she was trying to juggle the problems of the heart in Bedford, whilst trying to offload a garden pool in For Sale Or Swap. So, there were plenty of takers for the garden pool, and exchanges got quite irate, particularly when one woman thought she had been gazumped. Meanwhile, she was giving instructions to Peter to lay off the beta blockers. Sadly, the inability of women to multitask came to the fore as the message ‘Don’t let him take his beta blockers‘ became ‘Dont take the bishop to hospital‘. What did Fiona think of this? Well, we will never know, as Sally sent the message to the woman trying to acquire the garden pool.

Its festival season, and Ole decided to go to Leeds. I dropped him and a couple of his friends off on Thursday morning, noting that even after a dry week the drop off field was already muddy. What would it be like 4 days later? Anyway, he survived, but he was appalled at the state of the toilets. Don’t think he actually ‘went’ until he got back home. Of course, parents can go to festivals too, and with Peter out of action, Zac joined Sally, Fiona and myself at the Twinwood vintage festival in Clapham. It was a pleasant experience, with a couple of bottles of fizz to help it along. Zac actually enjoyed it, with vintage stalls, giant sausages, lemonade, and music not loud enough to prevent yourself from being heard. There was a downside, it rained, but the ever resourceful Sally did her best to keep dry. 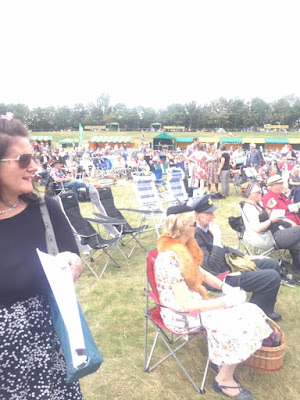 Twinwood was a little more genteel than Leeds 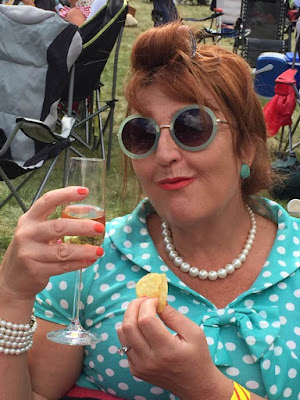 with plenty to eat and drink 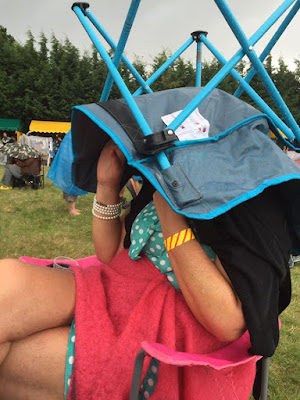 Sally kept out of the rain 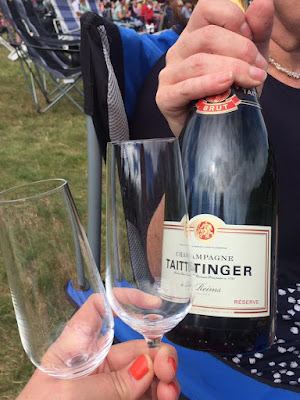 It got very wet!
Of course, Twinwood had one thing in common with Leeds, the toilets were decidedly vintage!
One of the reasons for going to Twinwood was to see Mike Sanchez, the singer / piano player whose biography was written by yours truly. Unfortunately, Mike contracted pneumonia and was unable to appear, but his book is still on sale! Here’s the latest review from Michael Lancaster at whatsgoodtodo…
Chances are dear reader that you have not heard of Mike Sanchez. If you think he may be the latest from the conveyor belt of Simon Cowell influenced wannabes then let me assure you that Mike is nothing of the sort. He is the genuine article that you would not find performing (miming to you and me) his latest single.
Mike was born in London in 1964 to Spanish parents and encountered prejudice. The family moved to Bewdley, Worcestershire when he was 11 and this area provided a stable base for many years. An early musical influence was a teacher who had performed in several doo wop style groups as Ricky Cool with the best known being Ricky Cool and the Rialtos. It was during this period that he started to develop his left hand boogie rhythms that are such a feature of his live work.
The original Big Town Playboys were formed in 1984 and the line-up included the aforementioned Mr Cool. Their first album was cut live the following year at the legendary Dublin Castle in Camden Town. They garnered a solid reputation for their live performances and worked with the likes of Robert Plant and Eric Clapton. For the latter they supported him for six nights at the Royal Albert Hall in 1990. At this time Mike was starting some solo gigs to augment his BTP earnings.
Sanchez departed the Big Town Playboys at the end of 1999. By 2001 he was a featured member of Bill Wyman’s Rhythm Kings. When this expired he formed his own seven-piece band and worked with Imelda May for the first time. He currently fronts a six-piece outfit, Mike Sanchez and his Band. For many years he was based in Bewdley but family issues have meant that he is now largely resident in Spain.
Mike Sanchez is one of the most electrifying performers you could possibly wish to see so do check his website for gigs. To describe Mike in one phrase I am reminded of a classic line from Jerry Lee Lewis “my heart is beating rhythm and my soul is singing the blues”. The book has been crafted by Michael Madden and an excellent read it is. It was Michael’s wife who suggested the book to Mike. I suspect that Mike, without a high profile, was surprised at the approach. That said he has obviously assisted the author greatly with very readable results.
Please do not visit your local WHS or Waterstones expecting to find the book waiting for you. It will not reach a mass audience so is unlikely to be stocked by the multiple book retailers. Better bet by far is to engage with Amazon or order direct from the publisher, Music Mentor Books.
Final thought on the publisher. I was not aware of them till reviewing this book. If you like your roots music then do check their website as they have issued several books that might just appeal.
Rating: 5/5

After the drop off at Leeds there was a bit of a rush to get to the society wedding of Nick Heys at Hassop Hall. It was a splendid affair, and it didn’t stop there. The following night there was a barbeque at chez Heys (senior), so I offered to do a big pan. The dish of choice was chilli, and it went down well, helped by the technique of chopping up the carrots into small pieces. The theory is that the surface area of the carrots is increased, similar to the principle that Nigella uses for her roasties at Christmas!

Elsewhere in the kitchen I made more gypsy creams, but I’ve decided that this recipe needs a bit more work. They looked ok but weren’t quite crisp enough. 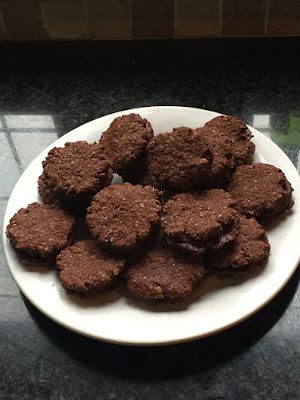 I also made veggie burgers, and they turned out rather well. They were made with Quorn mince and a couple of secret ingredients, ground flax and apple sauce, to bind the mixture in place of egg. They looked like real burgers, even after cooking, and I would have taken a photo of them but Gabi rushed them home.

Another experiment was a variation of key lime pie, with melted dark chocolate added to the lime filling. It tasted exactly the same as the chocolate limes that used to be sold by the quarter, and I’ll definitely be making this one again. 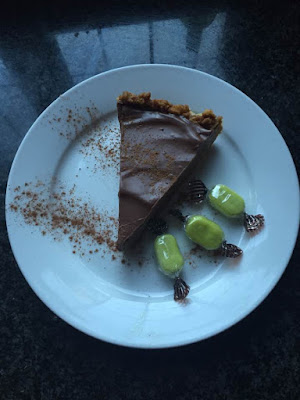 Its not been going too well at cricket, in fact at Mottram I got my first golden duck in a very long time, which should end all thoughts of me playing in the firsts any time soon. The firsts continue to court controversy, mainly around the antics of the first team captain and his continued attempts to hutch people. But lets give this one a little perspective. If a bowler steps over the line the delivery is invalid. Its a no-ball, but any runs scored still count. If a batsman steps over the line, perhaps the same should apply. Its invalid in terms of batting, but any dismissals still count. One situation is a transgression of the rules, the other is a valid live situation in which the bowler is vilified if he takes action. So lets take the responsibility away from the bowler and assign it to where it belongs, the umpire.

There was an incident on X-Factor recently where an oriental chap was truly awful. The following night there was another who was equally bad. Of course, Zac had an opinion!

‘Wing Wang Wong was terrible,’ he said.
‘This is a different man,’ he was informed.
‘Well Wing Wang Wong’s brother is also terrible.’
‘You cant say that – its racist.’
‘Half the people in China are called Wing Wang Wong, so its not racist.’

Personally I think he may have been watching too much of Donald Trump in the US Election campaign.

Back to the kitchen and Sally managed to burn a pan of spaghetti. Apparently it was only just burnt, so she advised pouring boiling water onto it. So I did, and then the burnt spaghetti was also scalded, and it remained so all the way to the bin.

The US court case will probably not take place after an out of court settlement. Disappointing really, but I probably have a few US trips in the offing, starting with Little Rock in Arkansas next month. Little Rock is famous for having an airport named after Bill Clinton and very little else. I’ll let you know if I find anything interesting.

Sticking with culinary matters we appear to have made a major breakthrough with Zac’s diet. I made haddock with chips, frying the haddock in a golden batter. Zac wasn’t keen on the batter, but he did play with the fish. So, I made him a plateful, though this time it was cod rather than haddock. He ate quite a lot, and even used a fork. He loved the home made chips, and even made a decent effort at the peas. I was quite pleased with myself.

‘What do you think Zac?’

I finally got notice of compensation for the disruption to my recent trip to Washington. It came to £670 as a voucher or £503 cash. I was hanging on to use the voucher, but there were so many downsides that I decided to take the cash. The main one was that I had to use the KLM website, and of course flights booked directly through there are way more expensive than by using something like Expedia and combining it with a hotel.

There have been some unhappy feet recently, and it started with Zac’s new school shoes. He doesn’t like wearing them, probably because they are too stiff, but that’s not the reason he gave. As he once again set off in his old shoes that are just about falling apart he said, ‘the grass looks greener in these.’

Next up it was Ole, and two games into his size 11 cricket shoes he announced that they were too small. At the end of the over he rushed off with Ivan, and swapped into Ivan’s spare pair of size 13s.

Finally, Zac was all set for his first football match of the season.

Sally fulfilled a lifelong ambition last week when she took part in a drag hunt. It was a somewhat friendly affair, but she got very excited about it. First, there was the costume, then the thrill of the build up, including port and fizz. Finally, there was the hunt itself, and she didn’t fall off – which seems so have been something of an achievement in itself! 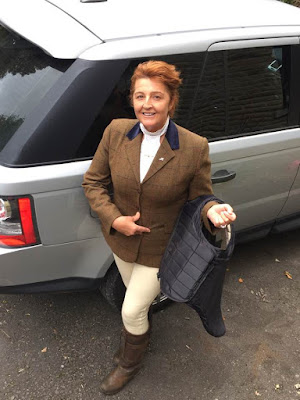