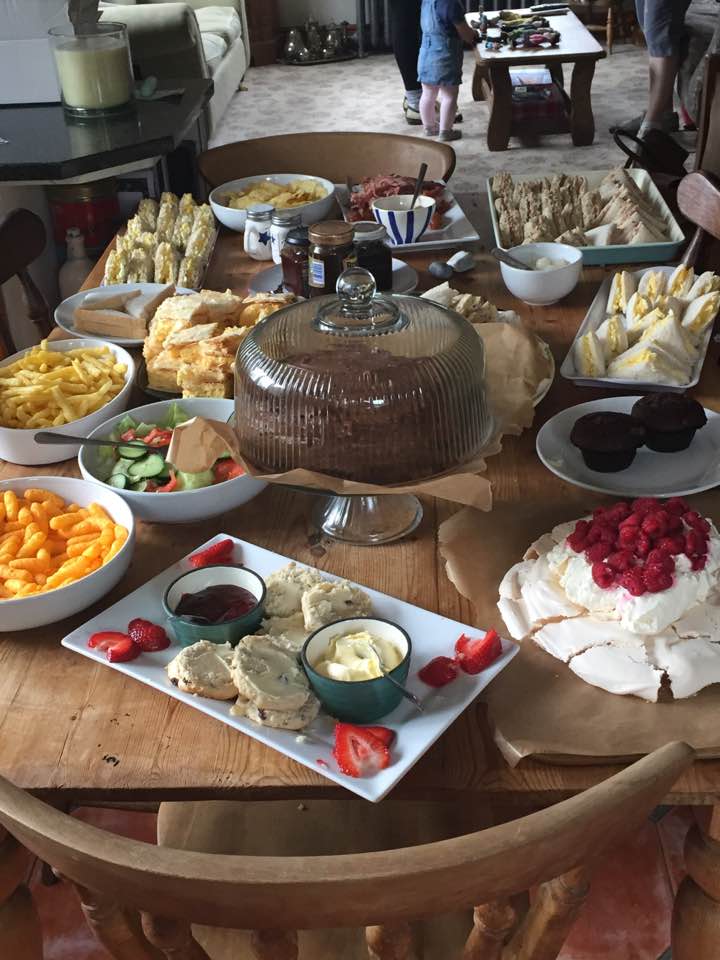 Well, some ups and some very big downs in this edition.

First of all Sapphire sadly fell victim to an accident, probably a collision with a car. He was taken to the vet where he passed away, aged just over two years old. Now, that is bad enough, but then there are choices. Do you want the body back (don’t worry, its been kept in cold storage), or do you want the pet crematorium to take him away and cremate him, and if that is your choice do you want the ashes back? A simple cremation is £42, the return of the ashes takes that up to £113. Well you can call me a sceptic but for an extra £71 I’m not convinced the pet crematorium will take the trouble of separating Sapphire for an individual cremation – it would seem more likely that all of the unfortunate cats, dogs, mice, goldfish, etc that have met an untimely end that week will be torched together, and for anyone who wants some, here’s a tube of ashes! The kids have dealt with the tragedy in opposite ways. Zac was distraught, wanting to know where it happened, who took him to the vet, and more importantly, whose car did the damage? Ole, however, admitted that he hated that cat. Its aggressive nature was a constant source of irritation to Ole’s gentle natured Bobby who remains bemused at the added attention that he has received! 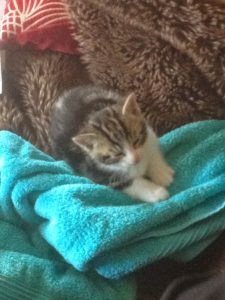 Now its one thing when a family pet suddenly passes away, its another when a close work colleague does the same. Unfortunately a chap that I had known for around five years and worked closely with for the last 18 months suddenly died last week. I got the message in a phone call from our mutual friend on Saturday, and it was a bit of a shock. He actually left a voicemail first, but I didn’t pick that up until later, and it kind of reminded me of a joke about a couple who went on holiday and left a housekeeper in charge of the cat and the ageing gran. On their return they asked the housekeeper how the cat was. ‘Oh it died,’ said the housekeeper. ‘Well that’s a bit of a shock,’ said the woman, you could have broken it to me gently, like you could have said he was chasing birds on the shed roof and fell off and unfortunately passed away’. ‘Oh yes, sorry, I didn’t think,’ said the housekeeper. Anyway, ‘how’s gran?’ The housekeeper thought for a moment, then said, ‘Well she was chasing birds on the shed roof…’ I’m sure Steve would have approved.

Speaking of which, I also went to see The Stranglers at The Apollo in Manchester. What a gig. It started with very polite bar staff in a posh looking bar, immaculate toilets, and bouncers who were incredibly helpful. Not quite like it was forty years ago! Anyway, the band started and the crowd went wild. Honestly, they did. Shirts were off, fifty year old men were crowd surfing, and the bouncers politely reached out for them, helped them to their feet, and assisted them to get to the back of the crowd so that they could do it all again! Can’t wait for next year!

You may recall from a few editions ago that Zac had his debit card hacked – or so it seemed. It now transpires that the fraudster was none other than his mum! She had somehow managed to link his debit card to her Paypal account! He’s not happy, and she has no idea how she did it, but ignorance is no defence. When he worked out that he had effectively paid for his own Christmas presents he had just one sentence. ‘That’s just not good parenting.’

The cricket season started last week, and I’ve managed two fifties in consecutive weeks. Can’t remember the last time that happened, but my ageing body is telling me not to do it again!

I don’t seem to have been particularly busy in the kitchen, though I did make flapjacks, orange rocky road and biscuits for Gabi’s Beauty Bash in Stalybridge. And, I must confess I kept a few biccies back for dunking! 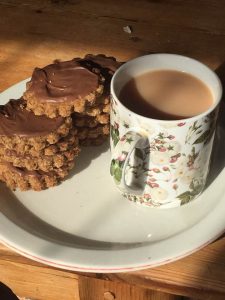 We also had a very nice afternoon tea, which can often be more work than anything else. The chocolate cake was especially popular! 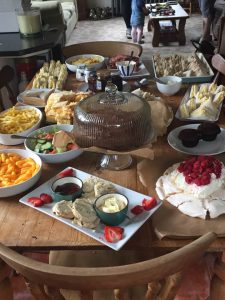 Of course the afternoon tea was for a family gathering – and that has its own set of challenges. Getting everyone together from great grandmother to the newest member of our family… 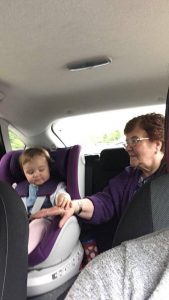 …and then there’s the problem of trying to avoid the selfie queen! 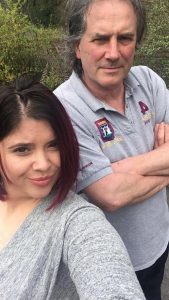 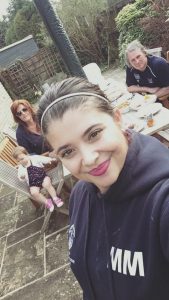 You’re not even safe on the trampoline! 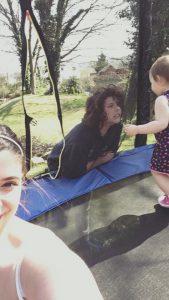 Elvis Under The Covers is progressing slowly but surely, and I have gently started the social media campaign. Mike Sanchez has agreed to write the foreword, and there will be many quotes from musicians and singers such as Al Kooper and Mary Coughlan.

…and the Michael Madden web page is here…

Elvis Under The Covers

The MMU expo was a frenetic affair, with my groups of students looking splendid in their Legacy IT t-shirts. I will now be continuing the projects (one dealing with broken websites and the other online courses including legacy languages such as COBOL) through to production. 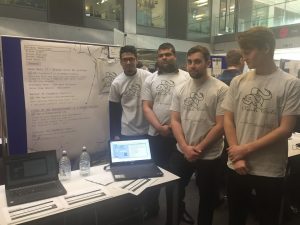 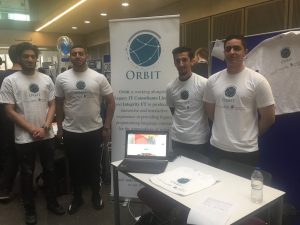 I went shopping with Zac last week. Thankfully he hates shopping as much as me, so we went to two shops, got everything we needed, and were back in the car within 40 minutes. There was a small distraction for a hat, but we decided against it! 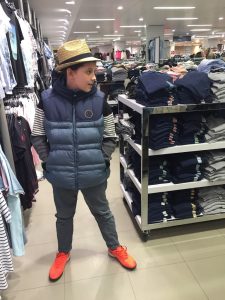 Zac has started to take a pride in his own appearance, unlike his brother who will wear anything! 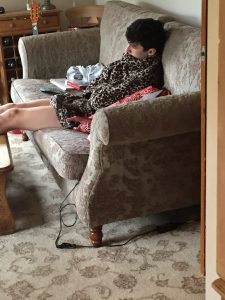 One thing that Zac did show an interest in was a watch. So, we acquired one and he put it on, but it had stopped. I told him it had to be wound up, and that’s when the trouble started. ‘How often do you have to wind it up?’ he asked. ‘Every day.’ ‘Every day? That’s just too much effort!’
The Christmas present seemed to have been going well, until a traumatic day in March! 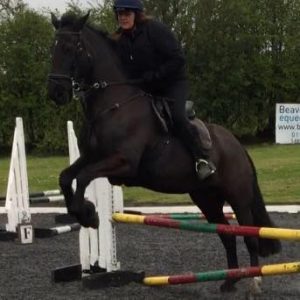 It all started as I set off early one Monday for a conference in London. I was in a session debating the merits of data protection when I got a call from Louise at the stable. I assumed that Sally’s phone had died, so I sent a message ‘in a conference – call you in 20 minutes’. A few minutes later I got another call, this time from Sally. The text exchange went like this…
Me ‘in a conference – call you in 20 minutes – anything urgent?’
Sally ‘going for a scan’;
Me ‘are you pregnant?’
Sally ‘brain scan’
I rang quite quickly after that to find that Nancy had decided to set off and turn right at full pace. Her legs had gone from under her and Sally had come off, briefly losing consciousness. She couldn’t remember where she was and what she was supposed to be doing later, which seemed normal to me, but they decided to take her to hospital for a brain scan. She was given the all clear, but probably only because they didn’t ask her ‘where did you move my stuff to?’ or ‘why are the noodles now in a separate cupboard away from the rest of the food?’ or ‘why do we need 27 tins of lentil soup?’
I sometimes wonder if Zac is growing up too fast! I dropped a crepe in front of him as he sat playing on his X-Box, and his response was ‘Ohh – you cheeky bugger’, meanwhile his conversations with mum seem to centre around what she would do in the event of a wet dream.
I had my ears syringed this week, for the first time ever. Not a painful or even unpleasant experience, until they show you what they have removed. Ugh!
Had another Sunday lunch a couple of weeks ago, this time at the Wanted Inn at Sparrowpit. The welcome was extremely friendly, even going so far as to ensure they had the right sausages in for Zac. The food was plentiful and reasonably priced, and you could tell that the gravy was made with the meat juices. The vegetables were a bit school dinner like, but the meat and potatoes were excellent. As were the home made puddings. Not had spotted dick for ages! Overall a
7.5/10.
We took the opportunity to visit Chester Zoo with grand daughter and nana on a cold week day – in fact it was so cold that my mum had to become a Green Bay Packers fan for the day. 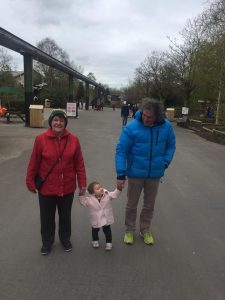 Nixie loved it, and although there was a new born giraffe and some baby elephants her favourite animal seemed to be the tapir! 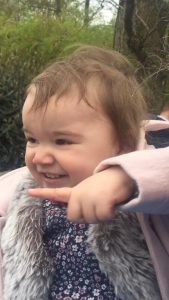 He seemed a bit aloof, and if Johnny Morris was around the tapir would have said something like..’Hey – of course a you wanna come see me I’m Brazilian. Like Neymar. They call a me Tostao The Tapir, but my real name is Kaka. I have sexi football. Don go to za giraffe. He look a like Peter Crouch. And the buffalo from Congo – ha – no footballers come from there. Da zebra – ee av a nice kit – but I av a nice tongue! Za elephants come out in trunks – must be freezin! Haha – zat ees my joke!’
Anyway, turned out he was lying all along – he was Malaysian!
Mothers Day was hilarious. Ole was very much the worse for wear after a heavy night, and it was late afternoon when he got around to giving mum her present. He had clearly been to Tesco and bought some chocolates and a book. The book was supposed to be about horse riding, according to him! Turned out it was a steamy Jilly Cooper novel! He was a tad embarrassed.
The snap General Election has caused a bit of a stir, with Zac wanting to know why Theresa May has called it. He would vote for David Cameron as Theresa May has messed things up. I look forward to the television debates!
A couple of football stories to finish, and Ole played his last ever official game of junior football this weekend, The 5-1 victory over Juno was well deserved, and was a fitting tribute to the hard work put in by Ben Williams, the manager, since he first got them all together at under 7s! As you can see – its not always been easy to get them organised, but last year’s league championship and third this year is a great achievement. 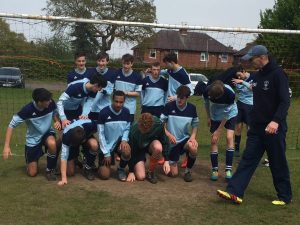 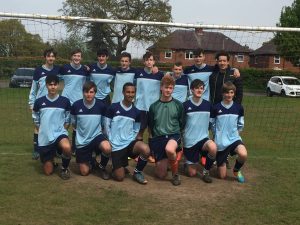 Zac, meanwhile, got asked to play for the school team again. Unfortunately he forgot his kit. However, with his network of contacts this wasn’t a problem. He got his mate Alex to ring home so that Alex’s mum could ring Sally who would then turn up with the aforementioned kit Worked like a dream.