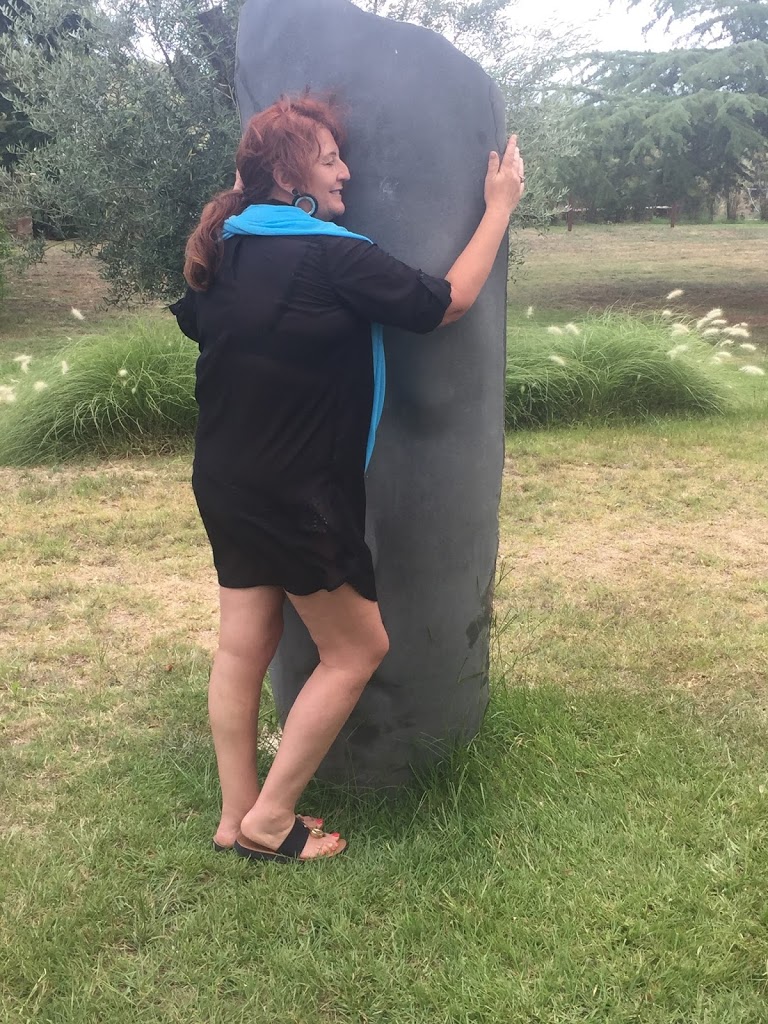 Elvis Launched And A Case Of Mistaken Identity

I must start with the news that my latest book, Elvis Under The Covers, is now on sale. The publishing process was remarkably easy – 2 days before launch I didn’t have a Kindle version – but that ended up going on sale first. If you order a printed copy it doesn’t exist today but it can be delivered to your door tomorrow!

Tomorrow is the 16th August, the 40th Anniversary of the death of Elvis Presley, and the official launch of the book. I have radio interviews on Ex-Pat Radio at 8am, BBC Radio Sheffield at 1pm and Oldham Community Radio at 9pm.

The Ex-Pat session features Mindi Miller, one of Elvis’s ex girlfriends, which should make it interesting. It also involves Laraine Bashford of AceClubElvis, the official European Elvis fan club, and Dave Hailwood who runs Ex-Pat Radio, and who is, coincidentally, from Sale. Laraine and Dave have been a great help with the promotion.

This is driving me nuts – the D on my keyboard only works intermittently so I have to go back and retype it. New PC on its way!

Back to the book…

You can win a signed copy here…

Win a signed copy of Elvis Under The Covers

Or you can buy a copy here

Elvis Under The Covers on Amazon.co.uk

Elvis Under The Covers on Amazon.com

It is also available on all other Amazon sites worldwide, in both printed form and on Kindle. 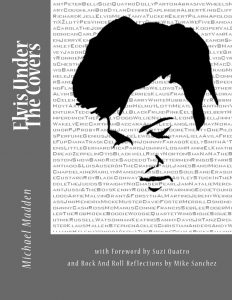 As a result of this publication I have developed some great email / Facebook friendships with several of the artists, including Sofai, Kenny Vance, Mary Coughlan, Jacen Bruce and, of course, Suzi Quatro.

I’ll let you know if any of them come round for tea!

Ole survived his first lads holiday that incorporated his 18th birthday, though it wasn’t all plain sailing when he got home. His mum opened his case and didn’t recognise the contents. ‘Are these Bruce’s?’ she asked. A bleary eyed Ole had to admit that no they were not Bruce’s, and neither was anything else in the case. They belonged to some poor chap from Huddersfield, as Ole had picked up the wrong case. There then followed a hasty trek back to the airport where the right case had fortunately been left untouched. The chap from Huddersfield had clearly had the good sense to check the contents before leaving the airport.

I made Brownies – but they didn’t last very long!

Have you been watching the athletics? The IAAF world championships have been compelling viewing on BBC 1, and at one point we thought that even Zac had developed an interest. No, it was a different competition. He wanted to watch one of his YouTube friends who was competing in the World Dwarf Games in Canada, and he was particularly keen on the basketball. I managed to find it on a live stream, but the quality of neither the stream nor the basketball was anything like that at the London Stadium.

We managed to spend 3 days in Spain towards the end of July, in a beautiful villa close to Girona. 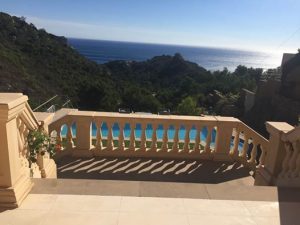 Had a very expensive lunch at a beach side restaurant and a really nice day at a vineyard and small restaurant that opened just for us.

The speciality of the restaurant was squid ink paella. It looked aweseome, but I have to say that I preferred my own! Really must get that second cookbook finished! 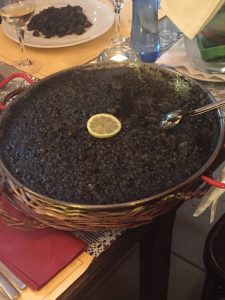 The vineyard was not commercial and was proud of the way it used natural resources to produce wine, honey, olive oil, etc. It even had a monument in the grounds for spiritual wellbeing,
Of course, Lady M had to give it a hug! 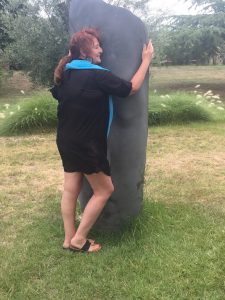 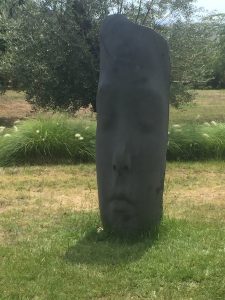 The highlight of our Spanish trip was undoubtedly a game of cards. Our American friends had brought along Cards Against Humanity that involved a set of situation cards and a set of answer cards. Zac quickly got the hang of it and starting making up his own questions based on the answer cards he picked up. Thoroughly recommended – though with an age advisory. Zac was particularly pleased to get answer cards stating Anal Beads and Dick Fingers.
Not thoroughly recommended is Ryanair who delayed us both ways making 3 consecutive late flights. Unfortunately neither of these was long enough for compensation.
Speaking of thoroughly recommended, I have just finished Terry Ravenscroft’s 3rd edition of Stairlift To Heaven, available on Kindle. Probably not as good as the first two but still well worth a read.

The YNot festival was a well publicised disaster, and Ole was fuming when he had to return early. He compared it to last year at Leeds where conditions and weather were worse, but the festival coped much better. On the plus side he was looking forward to his 50% refund, until I pointed out that he hadn’t actually paid for his ticket as yet!

Summer holidays and a commitment from Zac to get fit. He said he was going to walk to the cricket ground every day. He did it twice. We have no idea why but we suspect its not to get fit. I checked my keys to the tuck shop and they are still on my key ring. Any thoughts?

Finally, I have brought my website up to some sort of date spurred on by an interview with Kirk Fletcher for Leek Blues & Moorlands Americana Festival. Interesting chap is Kirk, he recently played with Joe Bonamassa. Looking forward to catching up with him at Leek at the end of September.

Oh, one more thing – good luck to Clive Ashton and his new venture at The Wellington Inn in Leek. Look forward to catching up with him soon too.