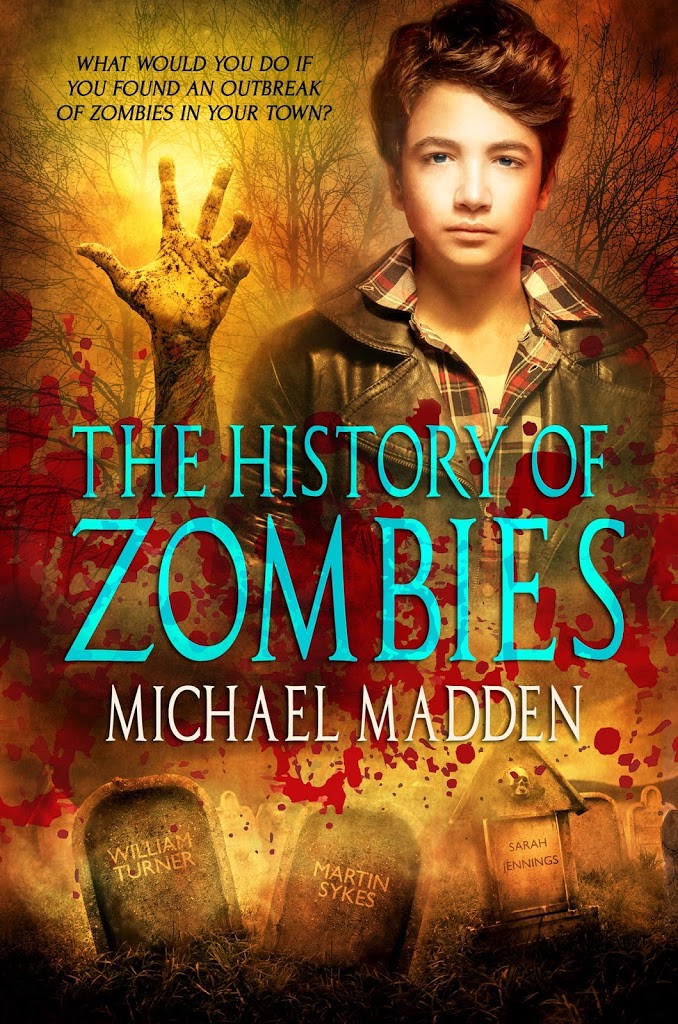 Scary In Print – Scarier In The Kitchen!

A couple of catch ups from the festive period, we went to see Guys And Dolls at the Royal Exchange Theatre in Manchester. This fantastic theatre always puts on a good show, and midweek tickets for under 26 year olds are just £7. Get yourself down there.

My surgery developed an infection, so my surgeon prescribed a seven day course of antibiotics. Fortunately, it being the festive season, they were unaffected by alcohol. However, they did provide another conundrum – the instructions said to take them either one hour before or two hours after food. When does that ever happen? Anyway, they obviously worked as a few days later I was given the all clear – and that’s that. Twenty five months after a high tibial osteotomy, I now have the legs of an 18 year old. He will be livid when he finds out.

Another good thing happened at Christmas – my credit card stopped working! Something to do with fraud, and I had to get a new card. No spending on it for seven days – and it was more than delighted at this unexpected detox.

The new year brought an unexpected cancellation of Ole’s driving test, so we rebooked it quickly and applied for out of pocket expenses (still not paid!) Unfortunately the rebooking was for Buxton, whereas all of his lessons have been in Macclesfield. That probably explains why he failed for driving too slowly! Anyway, all’s well that ends well, and on Valentine’s Day he successfully passed in Buxton, with just one minor fault. That’s 16 minor faults less than I got!

I’m still getting out and about with work – this time to Southampton. Piece of cake! I flew from Manchester, and on the return journey I was still in the office at 3.30 and landed in Manchester at 5.15. Quicker and cheaper than the train. Next stop…Exeter! My new website has finally been completed. Need a few more images – but its a lot better than it was previously!

With the MMU students, the broken links app is coming along a little more slowly than I would like, but the Tideswell Male Voice Choir website is almost done. The Cookie Policy generator should be ready in time for the Expo on March 16th.

Another website that came to my attention is my Whaley Bridge takeaway blog. This contains menus for all of the takeaways in Whaley Bridge, but I have not updated it for around 3 years. In fact, I’d forgotten about it until a friend said that his children use it all the time. So, my mission for this week is to bring it up to date. I will try to add the chippies, and maybe the cafes too. Update – takeaways done!

I did an interview on Ex Pat Radio with Scottish author Eilidh McGinness. She’s a fascinating character, and has a new book, The Cypher Bureau, coming out in March. The interview went well, and now Eilidh and myself are guest presenters on The Book Show every week! Still not quite sure how that happened, but never mind, it will give me a great opportunity to publicise my latest book.

Yes, regular readers, The History Of Zombies is finally available on the virtual and real shelves. The wonderfully talented Emmy Ellis at Studioenp did the cover – and we are very pleased with it. 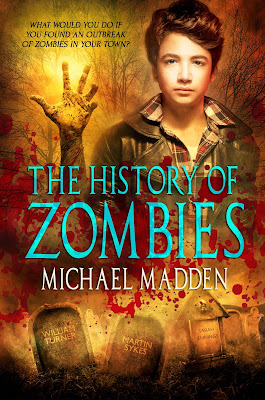 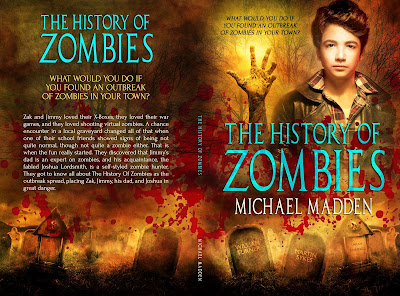 The book is aimed at young teens, but I have had positive feedback from adults and kids alike. Official launch date is 1st March, and the literary folk amongst you will realise that that is World Book Day, but unofficially it is available NOW! Still putting the marketing plan in place – if you would like to host a book signing please get in touch, and listen out for the very brief interview on High Peak Radio!
The History Of Zombies in paperback
The History Of Zombies on Kindle
You can find the latest press release on my the book page Michael Madden
Zac continues to frustrate in the kitchen, though he has started eating shallow fried cod. Very small amounts, and he has to remove all of the bits that have actually been fried. And he has to cover it in ketchup. And preferably accompanied by a large chip. He has certainly not improved in the fruit department, and his bedroom is a hiding place for apples. In fact. most rooms have one or more whole apples that he has taken away with every intention of eating. Or rather, every intention of hoodwinking us into thinking he would eat them. The previous title of ‘Best Cake Ever’ was held by the Christmas Chocolate Log, but in Zac’s book that has now been taken by Chocolate Cake with Nutella Buttercream filling and Chocolate Cream icing. The cake is a Mary Berry recipe, but the rest is all mine! 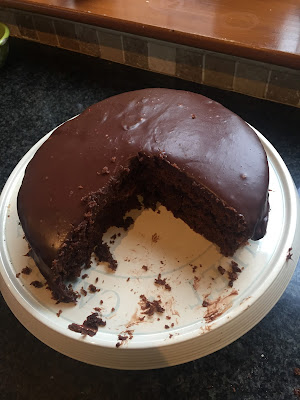 Elsewhere, it was my mum’s 83rd birthday, and her favourite is Coffee & Walnut cake, so I made this. 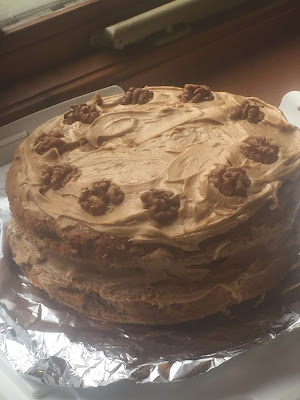 I tried the Nigella recipe, but I think there is a bit too much raising agent in it. This one worked out just fine.
I also made my first ever batch of scones. 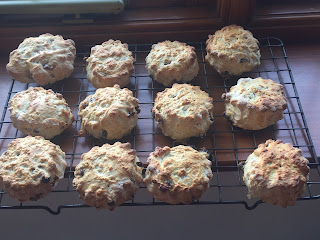 Not bad, but need to be more ‘dense’! And maybe a bit more fruit.
Meanwhile, the sweetcorn relish is now being made in industrial sized batches. I literally can’t make it fast enough!
The ingredients are:-
Sweetcorn, Red pepper, Green pepper, Onion, Tomato, Mustard powder, Salt, Pepper, Demerara sugar, Paprika, Cider vinegar, Water, Cornflour, Cayenne pepper. Quantities? Well, more sweetcorn than anything else, and the rest is to taste! It really is that simple!

Still on the cooking front, and Sally has been quoting Slimming World with everything she eats. Apparently its all about ‘sins’, but it seems to me that ‘sins’ are what you make of them. For instance, you can’t have anything cooked with a couple of teaspoons of oil, but you can have potatoes. I am sure that when Easter comes around chocolate eggs won’t be considered a sin.

Also in the kitchen, Gabi came over. She rivals Sally with her culinary skills, which include making toast that varies between ‘as black as the ace of spades’ and ‘dark matter, like a hole in space that could suck everything in’. For those unaware of Sally’s ability in the kitchen you only have to read this…

So you see why this pic is so scary! 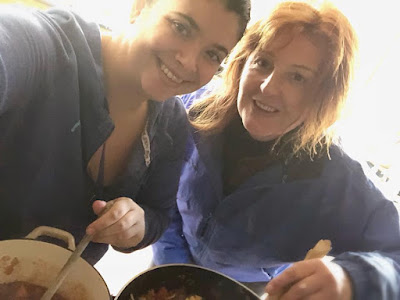 It finally happened, Sally walked in to room and had to ask, ‘What did i come in here for?’ Its all down hill from here!

It was her birthday recently, and after the fiasco of Zac’s birthday when the firework candles expired before he got off his X-Box, he decided that mum’s cake would make up for it. I have to say it was a bit of a fire risk!

Our quest for the perfect Sunday lunch took us back to The Bull’s Head at Foolow, and once again it didn’t disappoint. Any recommendations for more local venues would be much appreciated.

Ole won a scholarship. This was for his ‘A’ Level results, and it amounted to £2,000. I fear that this will now completely deter him from ever getting a student job, and it is certainly not a reflection of his common sense. He spent a proportion of it on flights and tickets for the Bencassim festival in Spain (yes I know he hasn’t received the money yet – but that didn’t seem to matter). I advised him to book Priority + 2 bags on Ryanair, as they have changed the rules. He completed the transaction, along with several other flatmates, but then he had to ask, ‘what kind of bag have I booked?’ I can see an opportunity for hiring a minibus to rescue lost teenage Brits wandering around Valencia in late July!

The Superbowl was a tremendous game, and Ole managed to stay up and watch it all in his Student Union bar. He is really getting into it – and I have now acquired season tickets for the Wembley games in October. It may even be to watch the Superbowl winning Philadelphia Eagles, so I guess we know who Zac will be supporting.

Zac has been dong well at football, he won a man of the match award and after a hard fought victory at Rose Hill his team mate tried to pick him up. Dec is probably one of the smallest on the team, and Zac certainly proved to be an immovable object. A few weeks later and Ole came to watch his brother play for the first time in ages. Ole was surprised at how well Zac has improved as a goalkeeper and all round footballer, whilst Zac was spurred on to another man of the match award as Whaley Under 14s hung on for a 2-1 victory.

And finally, as they used to say on the news, here is a strange one. Zac fell out with one of his long time friends, which was a bit sad, but then I saw them laughing and joking at the weekend. ‘I thought you had fallen out with him?’ I commented. ‘Not in real life,’ came the rather puzzling reply. ‘What do you mean not in real life?’ ‘We’ve only fallen out on the X-Box. Jim’s character can be really stupid sometimes. So their X-Box characters have fallen out – but they are still best of friends!