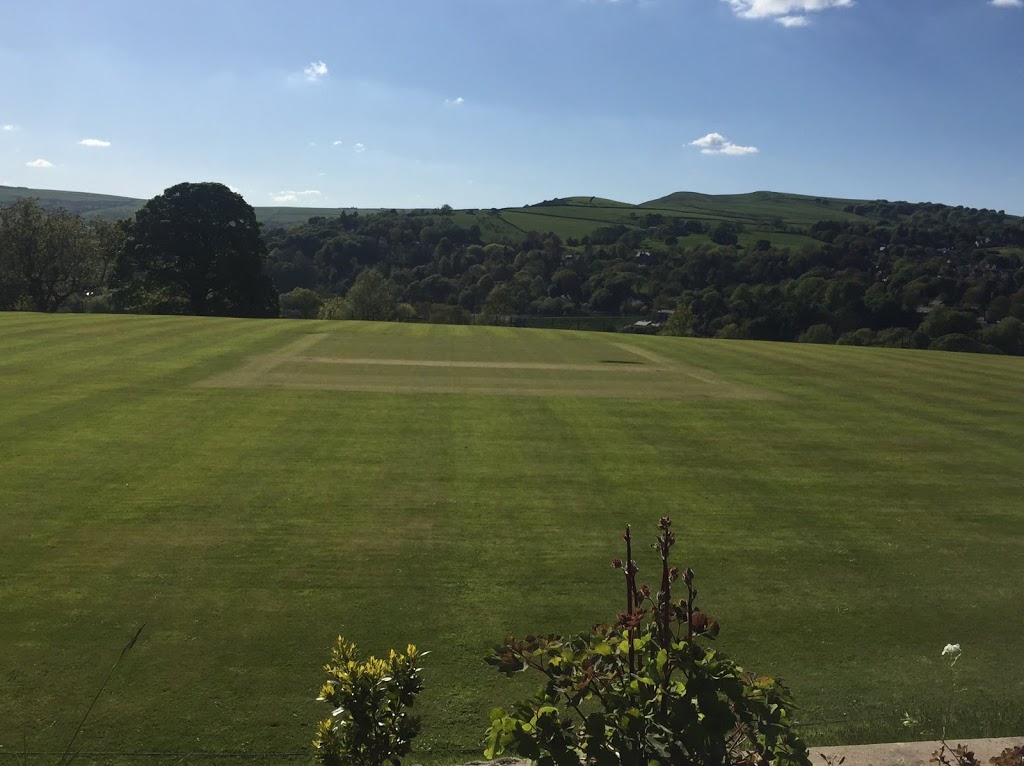 Things That Go ‘Bump’ In Ashbourne

Well, the Christmas Present (from 2016) is proving to be a dangerous business. Regular readers will remember the ‘going for a scan’ incident, well now we have had the ‘broken bridge’ incident in Ashbourne. Sally was on an all day lesson involving dressage, show jumping and cross country. At the end of the day there was an obstacle known as the broken bridge, a jump that had a lower landing than take off area. Nancy, the horse, jumped it magnificently. Sally, the rider, didn’t! She clung on as Louise filmed. Unfortunately, as Louise realised that Sally was about to hit the deck, she shrieked and the camera pointed at the sky, missing the £250 moment!

Louise managed to get her back to Buxton, and Ole, Zac and myself drove up to fetch her. Zac wanted to know how many people saw the incident, as he wanted to gauge the level of embarrassment. Ole drove my car back as I drove Sally and hers. The following day the medical staff at Stepping Hill gave the good news that nothing was broken, it was simply bruising and soft tissue damage. A liberal supply of painkillers was advised, and Sally went to the physio for ongoing treatment. This involved ultrasound and a series of exercises, but after a few days things were not improving. The second physio session, ten days after the original accident, gave cause for concern, and the physio sent her to Buxton Cottage hospital. Having been there myself for a dislocated shoulder, I was surprised that anyone would consider the Cottage for first line medical support, but to their credit they took several x-rays and diagnosed a broken shoulder blade.

No driving for two weeks, no horse riding for who knows how long, and an appointment at the fracture clinic, back at Stepping Hill. Their second attempt at diagnosis confirmed the break, and they gave her an improved collar and cuff. So, several trips to the farm and dozens of pain killers and anti-inflammatory pills later, I have discovered that the boxes of pills at Tesco do not register on the self checkouts, and Nellie the pig loves potatoes.

Speaking of Nellie – here she is – rushing to get her nose in my bag of goodies!


Next up is a film review. I have often wondered where Sky manage to get all of their movies from. That quantity must inevitably lead to a lack of quality, and that is what I encountered with The Hurricane Heist. If you want to watch a hurricane movie, I recommend Twister, This disaster started in a very similar way, but then somehow introduced the robbery of millions of dollars in used notes. The special effects at the end were hammed up in a poor imitation of The Mummy, and the whole thing was a preposterous mess. I guess casting someone from The Office in the role of evil bad guy was always going to be a bit of a stretch!

Ole had another of his “fuming” moments last week, not as dramatic as the middle of the night pizza delivery guy episode, but certainly more costly. He had taken out a student Spotify subscription at £4.99 rather than the usual £9.99. In November he received an email asking him to tick a box to verify he still wanted the student subscription. He didn’t tick the box so his subscription went up to £9.99, and he didn’t realise until April! He had absolutely no idea what to do, so after I pointed him in the direction of the website he ended up on Live Chat. The stress of this was horrendous, so he called me to act as his interpreter to the Live Chat guy. It worked, he got refunded his latest fiver overpayment, and they gave him some months free. He was about £15 down on the deal, but maybe that will teach him to check his emails a bit more carefully!

There was more drama from the direction of Salford University when Ole realised that he needed to pick his options for next year. Once again it involved a phone call to me, with Ole on the other end trying to navigate a website that I could not see. “Oh maybe its three I need to choose – no, wait – its five. This is ridiculous – oh – its given me four.” There was much huffing and puffing in a “the world is against me” kind of way. I think he will play the role of drama queen to perfection.

The struggle with Zac’s food choices goes on. He has agreed to try lobster, and maybe steak in gravy as he once had a chip (singular) in gravy and he quite liked it. “What about a pie?” I asked, pointing out that they have gravy in. “I can’t see me eating a pie,” he replied. “Why not?” “Because its a pie.” So that’s another crossed off the list.

Zac also had an interesting conundrum whilst watching the Champions League semi final. As a player went down injured the commentator said that the other players were right to play on unless it is a head injury.
Zac, so you only have to stop play if its a head injury?
Me, yes
Zac, what if its a heart attack?
Over to Mark Clattenburg.

You may recall that Ole had his driving test cancelled at short notice. That was back in January. The powers that be have finally refunded him £48 to compensate for two hours of additional lessons that he had to pay for to cover the revised test. However, they would not pay for his transport to get back from Salford to take his revised test, as they only pay travel expenses for those incurred on the day of the original test, and he had none of these as he was already at home. I have no idea how their logic works!

Zac has developed quite bad eczema on his hands, so I managed to get him some black silk gloves to protect them. One of his hands is worse than the other, so he often wears just one of these gloves. I  think he must have been watching Michael Jackson on Youtube.

Sally decided to cook beef braised with onions in a red wine sauce last week. However, after about two hours it had dried up. She inspected it, and asked, ‘Do you want me to put pastry on it as its got a bit of a burnt taste.’ I had no idea that pastry could conceal the acrid black taste that meat takes on when it has been allowed to dry out in a red hot pan, but I wasn’t prepared to take the chance. Its the first time that I have ever had fish finger butties for Sunday dinner!

Our friends the ducks are back. 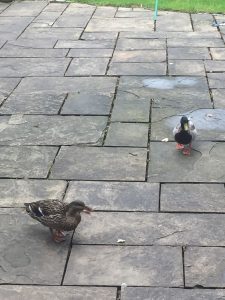 Now, they may not be the same ones as these, but they are just as friendly! 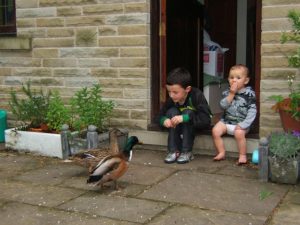 So, how is Sally acclimatising to her predicament after a couple of weeks without driving? She is a real ‘Woman of the people.’ ‘I have turned down two alcoholic beverages, I have walked all the way up the hill to the church, and I have taken a ride on a bus,’ she declared.

Finally, local cricket appears to be suffering a long, slow death, though maybe not so slow if recent events are anything to go by. The games are too long for the youth of today, and the situation will only get worse. Whaley Bridge failed to field a second team for a league match for the first time in living memory last week – and that might not be the last occasion this happens this season. 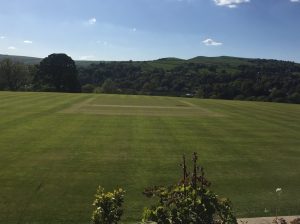 Turning from Old to New Horwich Road
The footsteps slow
The breath deepens
The incline takes its toll
Onwards and upwards
To the place where the tarmac ends
And a choice awaits
To the left, who knows?
To the right, a track
That does not deserve the name of any thoroughfare
A simple, small, often concealed sign
Marks the way to WBCC
Beware of dogs, horses, ramblers
And take extra care if your car has a low exhaust
Passing places stretch the term
As side by side two vehicles dance
And rock and almost kiss
As the overgrown verge conceals discarded rock
From dry stone walls
Upwards and onwards once more
A gate, a wall
A wall, a gate
Turn to the right
And rest
And breathe
Breathe in that cleanest of air
And gaze across the landscape
Boats rest on placid water
Clouds smile above a green tapestry
Criss-crossed with grey lines
And patchwork made good
With brown remnants
This is the picture from a jigsaw puzzle box
This is Blake’s England
This is Blake’s green and pleasant land
Below, the land is closer
A green baize
Where twenty two protagonists do battle
For nought but glory of the day
They chat
They play
They chat
Then play some more
Telling tales
Ever taller the more often told
Tall tales
That have lasted beyond a generation
Creating those that will last
A generation more
Ebbing and flowing
The game progresses
And starts and stops
Ah yes
It must be time for tea

Cherish and support your cricket club before it is too late!