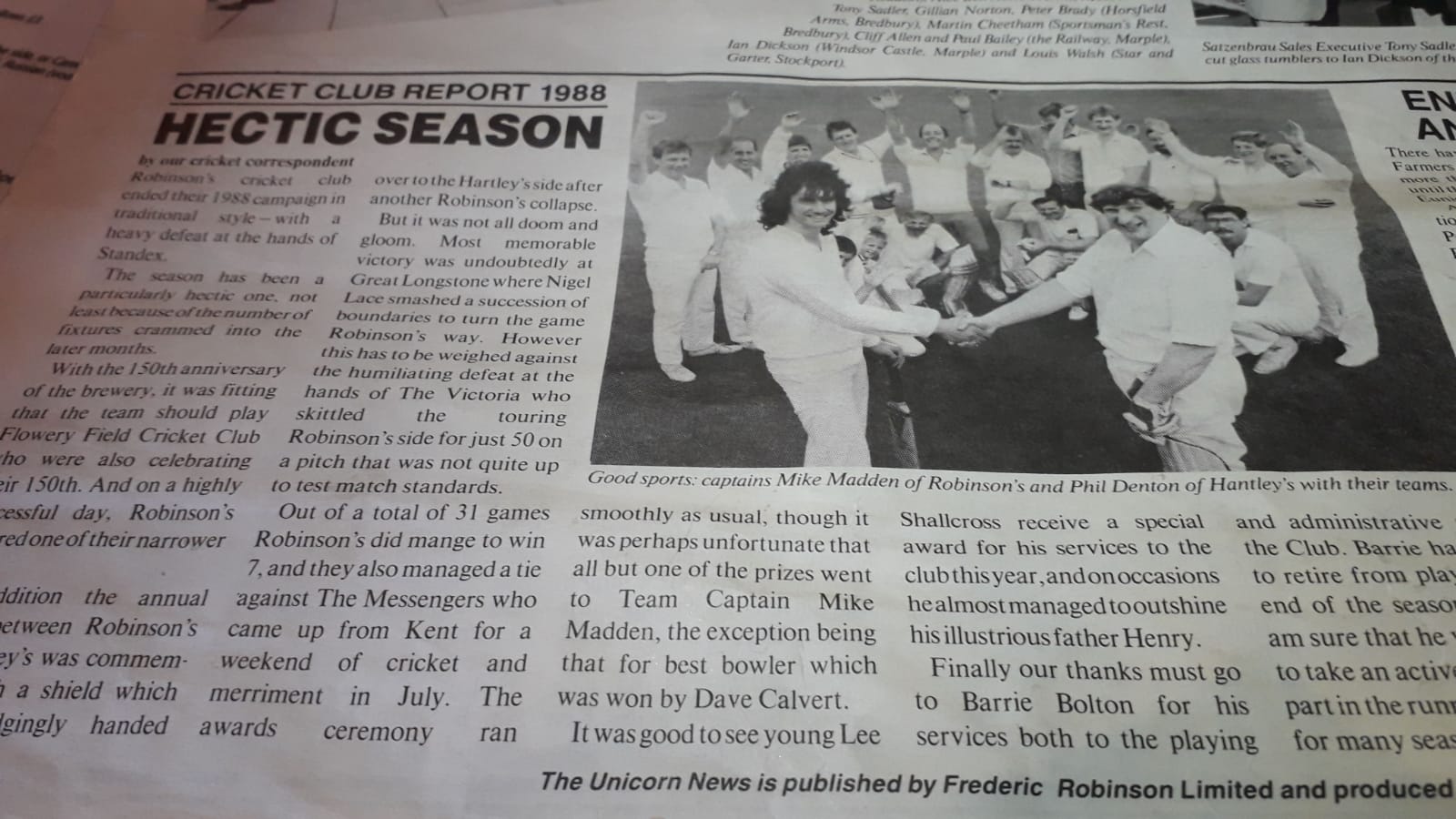 Sometimes its Zac that causes me the most consternation, sometimes its Ole. Sometimes its both of them. Throw in a healthy dollop of Gabi and Sally and, well, life can certainly get complicated.

This week it was definitely Ole!

I was a bit under the weather after a long week in Leeds and the onset of a cold, so I looked forward to a relaxing Saturday morning. I woke up at around 8.30, and my bleary eyes showed a message on the lock screen of my phone. It was Ole.

Hi dad, I went out with the flat tonight and left my phone stupidly in an Uber and I’m trying to get it back, I’ve called all the help lines but they’re all offline so can you contact me through Facebook – I’m trying to retrieve it asap. Sorry.

Ok – so I might have corrected some punctuation, and its not the most grammatically correct that it could be, but it was sent at 4.56am which probably also explains why the help lines were offline. No plea for help – I suspect that the very presence of the message was meant to trigger my assistance. I switched on FINDMYIPHONE, a very useful app that located Sally’s lost phone at Drinkwater’s back in the day. It showed that the phone was quite low on battery, but not moving, and it was somewhere just off Kingsway. I then accessed Ole’s email and saw his Uber receipt – driver’s name Javaid.

I sat down with a cup of coffee and pondered what to do next. I could wait until Ole got up, but that would be mid afternoon by which time the phone might have moved. I could ring him, but he has no phone! Sally suggested ringing two of his mates. Ethan answered somewhat tiredly, but it was still only 8.45! He wasn’t with Ole – but he knew he had lost his phone. Bruce didn’t answer. I checked the app again and the phone had still not moved. So, I decided to go and find it myself. The streets were deserted, except for parents taking their children to sporting, dance and other recreational activities, and it looked like a nice day for it. My satnav took me all the way along Kingsway towards Levenshulme, and where the road splits it is quite a nice area. I saw an Uber parked in a driveway, and sure enough FINDMYIPHONE was pointing right at it. I peered through the window, wondering what the twitching curtains of the neighbours would make of my approach, but there was no sign of the phone. Probably under a seat, I thought. The badge in the Uber was of Javaid, so that was a relief – no one else had picked the phone up, but it was only 9.30, Javaid had probably been in bed just a couple of hours, and would not want waking. I knocked gently on the front door. No answer. I sat back in my car and pondered some more. A lady walked past, veered towards Javaid’s house, then veered away again. I penned a note, leaving my number, and posted it through the letterbox. Minutes later I was on my way home.

That afternoon Ole connected through Facetime. It was around 2pm. I told him that I had found his phone and he needed to pick it up. He told me that Uber had a process that had to be followed for lost property. The chat ended and then the messages began.

I gave him the number thinking he would call on someone else’s phone, but no.

Ole: I’ve given them your number.

At this point I got a call from a number that I did not recognise, so I cancelled it

Ole: So they can call you

Me: I think they just did

Ole: Well call them back

Me: I can’t – its blocked from incoming calls.

I then explained that there was no point Uber calling me as they would probably want the person whose phone it was – so it would be best giving them the number of someone in the house so Ole could be there too.

Ole: No one is up

I did not respond to that

Messages stopped but then resumed again when he had given Uber Sinead’s number, but they had not called her.

I went in to the garden to brush up leaves, a very soothing process after communicating with Ole!

A short time later my phone rang – it was Javaid. What a nice man. He confirmed that he had the phone and Ole could pick it up any time before 4.

Ole: How am I going to get there?

Ole: That will take ages.

Ole: It says 35 minutes – that will cost a fortune

Ole: I’ll message Tristan, but he might not answer. We don’t communicate on here normally. Hang on – he will take me but not now.

Ole: He can take me after midnight.

Me: What about tomorrow?

I confirmed the arrangements with Javaid and all was well that ended well.

Big plus to Javaid and the wonders of FINDMYIPHONE, but for Ole – hmmm! You decide!

I reckon the FINDMY… generic group of apps could be a winner, for instance FINDMYWAYHOME where your house emits a homing beam that your phone can pick up and guide you home, or FINDMYSANITY where you can pinpoint the exact point that you descended in to madness and which of your children finally pushed you over the edge (probably all three!)

Anyway, I taunted Ole with a picture of a freshly steamed chocolate pudding that he was missing out on! 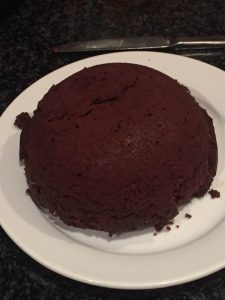 And while on the subject of all things culinary – Sally visited Albert and Jane Harris last week – these two sprightly pensioners were brewing up, and Sally thought she would help. Albert’s brew was an Oxo cube in a mug of hot water, which Sally mistook for coffee. Albert was less than impressed when she poured milk in it.

I have three sisters. One has three boys, one has two boys, and one has one boy. That is six cousins for Ole, Zac and Gabi. A couple of weeks ago, the six cousins and Ole went out in Essex. Ole was constantly reminded by just about everyone that his mum had asked them to look after him. “Don’t worry about me – I’ll drink them all under the table,” he complained. The previous night Gabi went out with friends and got hideously drunk. So by Saturday night I was messaging Ole to ask “are you drunk yet?”, and Gabi to find out “are you sober yet?”.

I think I have brought them up well!

Halloween was a bit of a damp squib! I know it rained a bit, but we had chocolate skulls, pumpkin carvings, scary glow stick eyes in the hedge, mini skeletons climbing up the walls, and a projector with scary videos and soundtrack. Not a single Halloween visitor. Not one. Maybe it was too scary! Maybe I’ll just keep it all up until Christmas! Maybe next year I’ll make sure its visible all over Whaley.

A shoutout to Zac’s football team. Whaley Bridge Under 15s are performing well and perhaps not getting the results that their effort deserves (except for a huge win over local rivals Chinley). So, hats off to Dranny, John and Ros (never underestimate the value of admin) – and here’s hoping the second half of the season brings many more points.

When Ole is away we make all the same food – just in a way that suits us. When he is back, we generally revert to what he likes. And there are certain foods that he definitely does NOT like.

He turned up unannounced a couple of weeks ago and his favourite chilli dish was quite wrong. “All of a sudden its ok to put mushrooms in chilli – the worlds gone mad,” he complained.

That wasn’t the end of his problems that weekend. On his return journey he boarded the train at Whaley Bridge for Salford. He got asked for a ticket somewhere near Stockport, and said that when he got on at Davenport there was no ticket machine! Davenport? More of that later. He offered to buy a ticket with his railcard, but the collector smelt a rat. He said he would have to pay full fare from Davenport to Salford, and he should consider this as a warning. Next time it would be £100 fine. Ole was outraged. I always get a ticket from Davenport and never had a problem. Much swearing and cussing followed, until I pointed out that the cost of a railcard reduced single from Whaley Bridge to Salford was still more than a full fare from Davenport to Salford, so he had still conned the railways and was in profit. He didn’t quite want to see the logic in that.

A blast from the past from Whatsapp the other day, as one of my first mentors, Bernice, sent me this trip down memory lane. 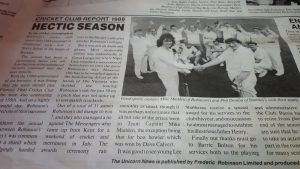 Anyone who has read The History Of (My) Coding will know that I played a lot of cricket, wrote a lot of match reports, and created a lot of stats in the 11 years or so that I was at the brewery – if you have not read it you can find it here.

The end of the season at York Races came and went – with Sally finishing the final meeting with no less than THREE badges. There was her members badge, an owner’s badge, and a restaurant badge. I wonder if she can go one better next season?

Zac is a bit of a whizz at badminton, but this term for PE he has chosen basketball. He’s not too happy with it and wants to change. His choices are hockey or table tennis. He’s not bad at table tennis – many hours playing in the garden with Ole have honed his skills. However, he is likely to choose hockey. The reason, “there are only gay guys and girls that play table tennis,” he said. Now, this is not some form of homophobia or sexism, he genuinely believes that those two groups would not match his own talents around a ping pong table.

More bad news for Zac – Sally got stuck in Buxton waiting for her car to be fixed when Zac came out of school. He didn’t have a key. He called mum who went in to a panic. She called Helen who picked her up and they abandoned the Range Rover at the garage. As they pulled into the driveway, Zac was sat on the step with a face like thunder. He greeted them with his trademark upward nod of the head (think Caribbean!) Helen point blank refused to go inside the house. “You’ll have to make him sausages,” she said, ushering Sally out of the car. Later that night he was at football training, and the final indignity was having to get a lift in Ole’s car. It was a bad day!

I lost my business banking secure key – so had to get a new one. I then had to get my credentials reset. HSBC reckon that is dead easy! Here is what their website says!

We need to reset your security details because you’ve forgotten more than one of your credentials. Resetting your details is quick and easy – simply answer the questions on the following screen and then print and fax the form to us.

Alternatively the form may be taken to your local branch.

Anyone have a fax? Or a local branch?

Its Thanksgiving weekend, which means Black Friday and Cyber Monday. To celebrate, I’ve made four of my books free on Kindle – click the links below from 8am Thursday morning. If you download one – I would really, really, really appreciate an Amazon review.